By SpaceRef Editor
January 22, 2015
Filed under Alliant Techsystems, Commerce, US 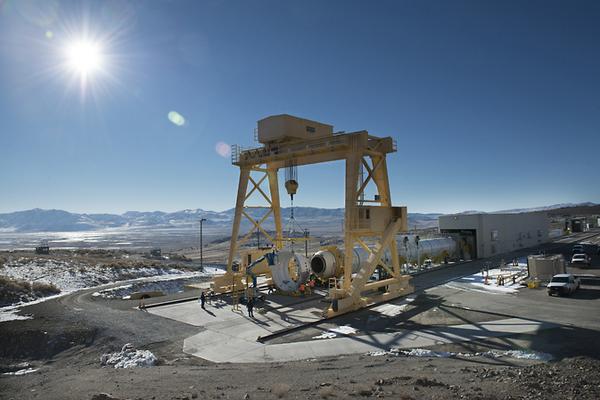 NASA and ATK  have completed installing the first Space Launch System booster qualification motor, QM-1, in a specialized test stand in Utah. The largest solid rocket motor ever built for flight, QM-1 is now being prepared for its static-fire test, which is scheduled for March 11.

“Testing before flight is critical to ensure reliability and safety when launching crew into space,” said Charlie Precourt, vice president and general manager of ATK’s Space Launch division. “The QM-1 static test is an important step in further qualifying this new five-segment solid rocket motor for the subsequent planned missions to send astronauts to deep space.”

For this test, QM-1 is being conditioned to 90 degrees to test its higher temperature capabilities against the required temperature range. Lying horizontally in the test stand, the motor is 154 feet in length and 12 feet in diameter. When fired, QM-1 will produce 3.6 million pounds of maximum thrust.

The five-segment rocket motor in conjunction with four RS-25 engines will propel NASA’s Space Launch System (SLS) off the launch pad . The SLS, along with NASA’s Orion spacecraft, provides a flexible deep space exploration platform to take humans and cargo to multiple destinations across our solar system.

Orion successfully experienced its first flight test in December, orbiting twice around the earth and flying as far away as 3,600 miles, – more than 15 times farther than the International Space Station and farther than a human spaceflight vehicle has traveled in 40 years. The first test flight of SLS, called Exploration Mission-1 (EM-1), is just a few years away. EM-1 will use two of ATK’s five-segment solid rocket motors.

The SLS five-segment motor is based on the design heritage of the flight-proven solid rocket boosters used on the Space Shuttle Program, and was upgraded using new technologies and updated materials.

“While we made modifications to our booster for NASA’s new SLS, during the 30 years of the Space Shuttle Program, we also constantly monitored and improved our design,” said Precourt, a four-time space shuttle astronaut.

ATK is an aerospace, defense, and outdoor sports and recreation company with operations in 21 states, Puerto Rico, and internationally. News and information can be found on the Internet at www.atk.com, on Facebook at www.facebook.com/atk, or on Twitter @ATK.