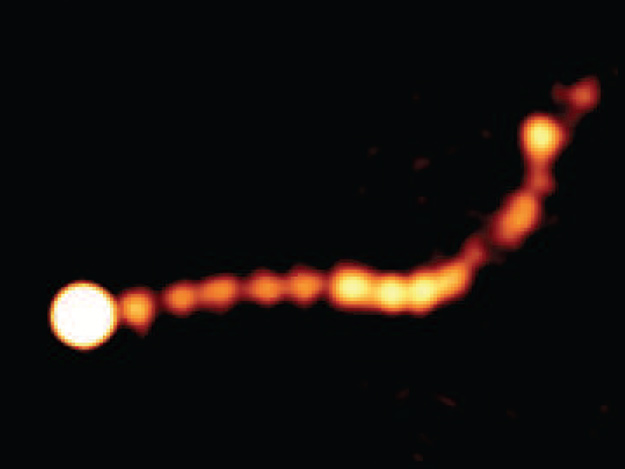 Blasting over two million lights years from the centre of a distant galaxy is a supersonic jet of material that looks strikingly similar to the afterburner flow of a fighter jet, except in this case the jet engine is a supermassive black hole and the jet material is moving at nearly the speed of light.

Research published over the weekend in the Astrophysical Journal Letters shows the galaxy-scale jet to have bright and dark regions, similar to the phenomenon in an afterburner exhaust called ‘shock diamonds.’

A new image of the previously studied jet reveals regularly spaced areas that are brighter than the rest of the jet in a pattern that echoes the way the afterburner from a jet engine has brighter diamond-shaped areas in its general glow.

“One intriguing possibility is that the pattern we see in this cosmic jet is produced in the same way as the pattern in the exhaust from fighter jet engines,” said Dr Leith Godfrey, from the Curtin University node of The International Centre for Radio Astronomy Research.

Dr Godfrey said the jets are produced when material falls onto a supermassive black hole at the centre of a galaxy, but many details beyond that remain unknown.

“Massive jets like this one have been studied for decades, since the beginning of radio astronomy, but we still don’t understand exactly how they are produced or what they’re made of,” he said.

“If the brighter patches are caused by the same process in astronomical jets as they are in earthly jet engines, then the distance between them can give us important information about the power of the jet and the density of the surrounding space.”

Dr Godfrey said that jets like the one he studied are the largest objects in the Universe, about 100 times larger than the Milky Way.

“If we want to understand how galaxies form and grow, we need to understand these jets. They are extremely powerful and are believed to stop stars forming in their parent galaxy, limiting how big the galaxies can grow and effecting how the Universe looks today,” he said.

“This new image of the jet shows detail we’ve never seen before and the pattern we revealed provides a clue to how jets like this one work,” said Dr Jim Lovell, a co-author from the University of Tasmania.

“This particular jet emits a lot of X-rays, which is hard to explain with our current models. Our new find is a step forward in understanding how these giant objects emit so much X-Ray radiation, and indirectly, will help us understand how the jet came to be.”

ICRAR is a joint venture between Curtin University and The University of Western Australia providing research excellence in the field of radio astronomy. Original Publication:

The phenomenon known as ‘shock diamonds’ in the afterburner of a NASA SR-71B Jet. The similarity between a jet afterburner and the enormous high powered astronomical jet Dr Godfrey and colleagues studied is striking. Image Credit: NASA.