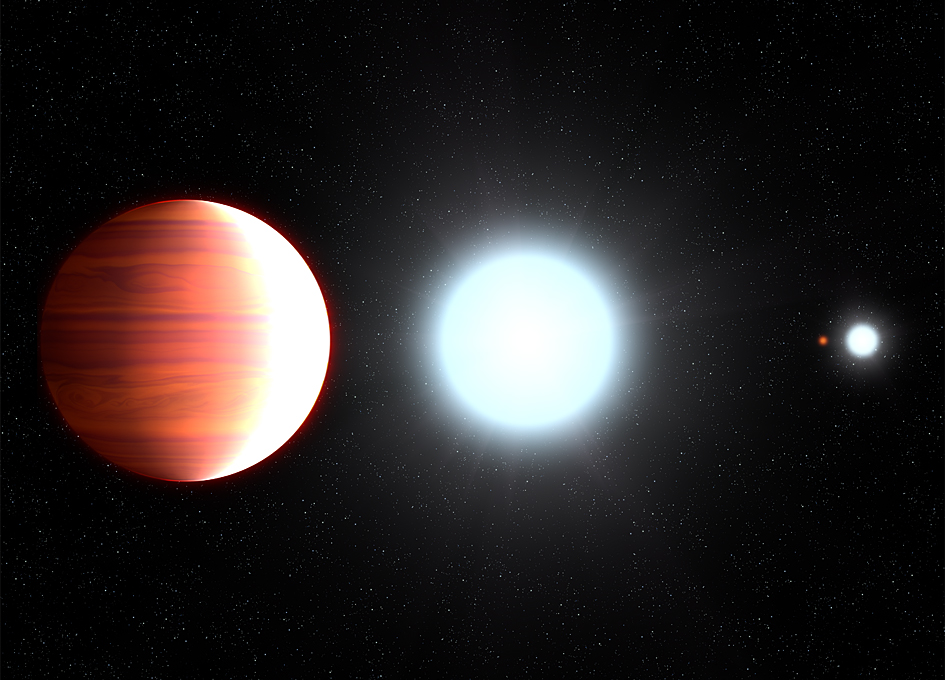 Astronomers at Penn State have used the Hubble Space Telescope to find a blistering-hot giant planet outside our solar system where the atmosphere “snows” titanium dioxide — the active ingredient in sunscreen. These Hubble observations are the first detections of this “snow-out” process, called a “cold trap,” on an exoplanet. This discovery, and other observations made by the Penn State team, provide insight into the complexity of weather and atmospheric composition on exoplanets, and may someday be useful for gauging the habitability of Earth-size planets.

“In many ways, the atmospheric studies we’re doing now on these gaseous ‘hot Jupiter’ kinds of planets are test beds for how we’re going to do atmospheric studies of terrestrial, Earth-like planets,” said Thomas Beatty, assistant research professor of astronomy at Penn State and the lead author of the study. “Understanding more about the atmospheres of these planets and how they work will help us when we study smaller planets that are harder to see and have more complicated features in their atmospheres.” The team’s results are published in the October 2017 issue of The Astronomical Journal.

Beatty’s team targeted planet Kepler-13Ab because it is one of the hottest of the known exoplanets. Its dayside temperature is nearly 5,000 degrees Fahrenheit. Kepler-13Ab is so close to its parent star that it is tidally locked, so one side always faces the star while the other side is in permanent darkness. The team discovered that the sunscreen snowfall happens only on the planet’s permanent nighttime side. Any visitors to this exoplanet would need to bottle up some of that sunscreen, because they won’t find it on the sizzling-hot daytime side.

Intrigued by this surprising discovery, researchers concluded that the light-absorbing gaseous form of titanium oxide has been removed from the dayside of planet Kepler-13Ab’s atmosphere. Without the titanium oxide gas to absorb incoming starlight on the daytime side, the atmospheric temperature there grows colder with increasing altitude.

“Understanding what sets the climates of other worlds has been one of the big puzzles of the last decade,” said Jason Wright, associate professor of astronomy at Penn State, and one of the study’s co-authors. “Seeing this cold-trap process in action provides us with a long sought and important piece of that puzzle.”

The team’s observations confirm a theory from several years ago that this kind of precipitation could occur on massive, hot planets with powerful gravity. “Presumably, this precipitation process is happening on most of the observed hot Jupiters, but those gas giants all have lower surface gravities than Kepler-13Ab,” Beatty explained. “The titanium oxide snow doesn’t fall far enough in those atmospheres, and then it gets swept back to the hotter dayside, revaporizes, and returns to a gaseous state.”

The researchers used Hubble’s Wide Field Camera 3 to conduct spectroscopic observations of the exoplanet’s atmosphere in near-infrared light. Hubble made the observations as the distant world traveled behind its star, a transit event called a secondary eclipse. This type of transit yields information on the temperature of the components of the atmosphere on the exoplanet’s dayside.

“These observations of Kepler-13Ab are telling us how condensates and clouds form in the atmospheres of very hot Jupiters, and how gravity will affect the composition of an atmosphere,” Beatty explained. “When looking at these planets, you need to know not only how hot they are, but also what their gravity is like.”