By SpaceRef Editor
May 15, 2015
Filed under Astrophysics, US, W.M. Keck Observatory 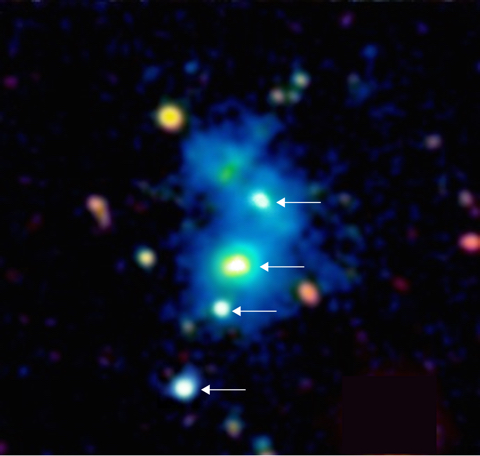 Using the W. M. Keck Observatory in Hawaii, a group of astronomers led by Joseph Hennawi of the Max Planck Institute for Astronomy have discovered the first quadruple quasar: four rare active black holes situated in close proximity to one another. The quartet resides in one of the most massive structures ever discovered in the distant universe, and is surrounded by a giant nebula of cool dense gas. Because the discovery comes with one-in-ten-million odds, perhaps cosmologists need to rethink their models of quasar evolution and the formation of the most massive cosmic structures. The results are being published in the May 15, 2015 edition of the journal Science.

Hitting the jackpot is one thing, but if you hit the jackpot four times in a row you might wonder if the odds were somehow stacked in your favor.

Quasars constitute a brief phase of galaxy evolution, powered by the in-fall of matter onto a supermassive black hole at the center of a galaxy. During this phase, they are the most luminous objects in the universe, shining hundreds of times brighter than their host galaxies, which themselves contain hundreds of billions of stars. But these hyper-luminous episodes last only a tiny fraction of a galaxy’s lifetime, which is why astronomers need to be very lucky to catch any given galaxy in the act. As a result, quasars are exceedingly rare on the sky, and are typically separated by hundreds of millions of light-years from one another. The researchers estimate that the odds of discovering a quadruple quasar by chance is one in ten million. How on Earth did they get so lucky?

Clues come from peculiar properties of the quartet’s environment. The four quasars are surrounded by a giant nebula of cool dense hydrogen gas, which emits light because it is irradiated by the intense glare of the quasars. In addition, both the quartet and the surrounding nebula reside in a rare corner of the universe with a surprisingly large amount of matter. “There are several hundred times more galaxies in this region than you would expect to see at these distances,” said J. Xavier Prochaska, professor at the University of California Santa Cruz and the principal investigator of the Keck Observatory observations.

Given the exceptionally large number of galaxies, this system resembles the massive agglomerations of galaxies, known as galaxy clusters, that astronomers observe in the present-day universe. But because the light from this cosmic metropolis has been travelling for 10 billion years before reaching Earth, the images show the region as it was 10 billion years ago, less than 4 billion years after the big bang. It is thus an example of a progenitor or ancestor of a present-day galaxy cluster, or proto-cluster for short.

Piecing all of these anomalies together, the researchers tried to understand what appears to be their incredible stroke of luck. “If you discover something which, according to current scientific wisdom should be extremely improbable, you can come to one of two conclusions: either you just got very lucky, or you need to modify your theory,” Hennawi said.

The researchers speculate that some physical process might make quasar activity much more likely in specific environments. One possibility is that quasar episodes are triggered when galaxies collide or merge, because these violent interactions efficiently funnel gas onto the central black hole. Such encounters are much more likely to occur in a dense proto-cluster filled with galaxies, just as one is more likely to encounter traffic when driving through a big city.

“The giant emission nebula is an important piece of the puzzle since it signifies a tremendous amount of dense cool gas,” said Fabrizio Arrigoni-Battaia, a PhD student at the Max Planck Institute for Astronomy who was involved in the discovery.

Supermassive black holes can only shine as quasars if there is gas for them to swallow, and an environment that is gas rich could provide favorable conditions for fueling quasars.

On the other hand, given the current understanding of how massive structures in the universe form, the presence of the giant nebula in the proto-cluster is totally unexpected. “Our current models of cosmic structure formation based on supercomputer simulations predict that massive objects in the early universe should be filled with rarefied gas that is about ten million degrees, whereas this giant nebula requires gas thousands of times denser and colder,” said Sebastiano Cantalupo, currently at ETH Zurich, that led the imaging observations a the Keck Observatory during his previous research appointment at UCSC. “It is really amazing that this discovery was made the same night of the Slug Nebula while we were hunting for giant Lyman alpha nebulae illuminated by quasars — my first night at Keck Observatory and definitely the most exciting observing night I have ever had!”

As such, the discovery of the first quadruple quasar may force cosmologists to rethink their models of quasar evolution and the formation of the most massive structures in the universe.

The authors wish to recognize and acknowledge the very significant cultural role and reverence that the summit of Maunakea has always had within the indigenous Hawaiian community. We are most fortunate to have the opportunity to conduct observations from this mountain.

The Low Resolution Imaging Spectrometer (LRIS) is a very versatile visible-wavelength imaging and spectroscopy instrument commissioned in 1993 and operating at the Cassegrain focus of Keck I. Since it has been commissioned it has seen two major upgrades to further enhance its capabilities: addition of a second, blue arm optimized for shorter wavelengths of light; and the installation of detectors that are much more sensitive at the longest (red) wavelengths. Each arm is optimized for the wavelengths it covers. This large range of wavelength coverage, combined with the instrument’s high sensitivity, allows the study of everything from comets (which have interesting features in the ultraviolet part of the spectrum), to the blue light from star formation, to the red light of very distant objects. LRIS also records the spectra of up to 50 objects simultaneously, especially useful for studies of clusters of galaxies in the most distant reaches, and earliest times, of the universe.

Keck Observatory is a private 501(c) 3 non-profit organization and a scientific partnership of the California Institute of Technology, the University of California and NASA.