By SpaceRef Editor
July 19, 2009
Filed under Astrobotic Technology, Commerce, US

Astrobotic Technology Inc. today released details of a lunar robot that can survive the blistering heat at the Moon’s equator, which is the robot’s destination in May 2011 when it will visit the Apollo 11 site.

Noon at the equator is hotter than boiling water – 270 degrees F. The robot, developed in collaboration with Carnegie Mellon University, beats the heat by keeping a cool side aimed away from the Sun to radiate heat off to the black sky. It travels toward or away from the sun (generally east or west) without turning its radiator into the light. It can travel north and south by tacking like a sailboat.

The Apollo 11 crew landed shortly after local dawn and left by mid-morning, so Neil Armstrong and Buzz Aldrin never encountered the noontime extreme. (Each day on the Moon is two weeks of sun followed by two weeks of darkness.)

Led by Dr. William “Red” Whittaker, famed Carnegie Mellon roboticist, Astrobotic intends to win the $20 million Google Lunar X Prize with this robot. It will be a rolling TV studio and Internet node, sending back high-definition video of its adventures. 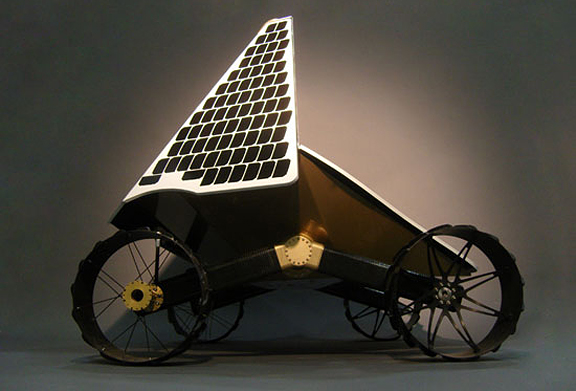 The rover details posted today on the company’s web site, www.astrobotictech.com, show an asymmetrical shape – a flat radiator angled up to the black lunar sky on the cold side to radiate excess heat and a half-cone of solar cells on the hot side to generate electrical power.

Unlike Mars rovers that have motors in the hub of each wheel, the Astrobotic lunar rover tucks two motors inside the body of the robot where they are safeguarded both from heat and the abrasive lunar dust. Each motor drives one side of the robot’s wheels using a chain drive like a bicycle.

Key to the design are tailored composite structures made from carbon fiber tape and resin. Many aerospace designs use composite materials to achieve high strength at low weight; composite parts being shaped for the lunar machine have the added ability to transmit heat from the hot to the cold side with more efficiency than copper or other metals. 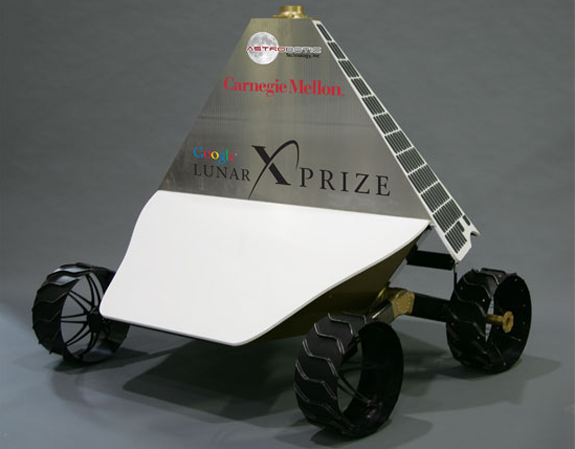 The challenge of surviving the lunar night, where the minus 240 degree F temperature is colder than liquid nitrogen, is still to be solved. Surviving the night is not required to win the main Google Lunar X PRIZE but would generate a bonus. The team also must develop a landing platform to descend from lunar orbit to the surface; launch from Earth and transit to the Moon will be accomplished via already-established commercial launch vehicles and kick motors.

Carnegie Mellon is a private research university located in Pittsburgh, Pa.  Its Robotics Institute, a division of the School of Computer Science, is one of the world’s largest robotics research and education institutions, with pioneering programs in field robotics, autonomous navigation and computer vision.  The most recent of its many NASA-sponsored projects is a prototype lunar prospecting robot. Its teams have been successful in competitive robot contests, including the 2007 DARPA Urban Challenge. For more, see www.ri.cmu.edu.