By SpaceRef Editor
March 3, 2011
Filed under Astrobotic Technology, Commerce, US 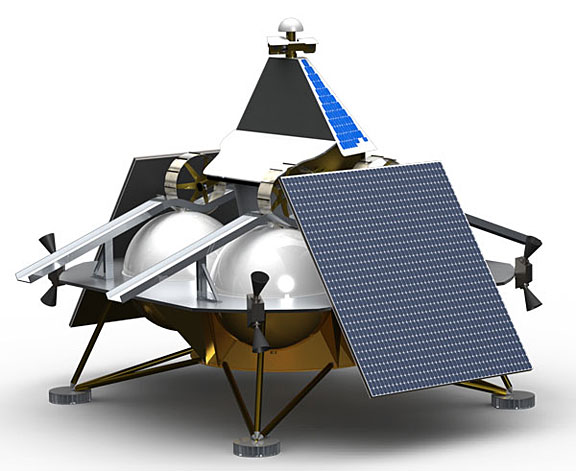 Astrobotic Technology Inc. today released a new guide for researchers on preparation of their instruments for the company’s robotic expedition to the surface of the Moon. The expedition, based on technology from Carnegie Mellon University, will carry up to 240 pounds of science, engineering, and marketing payloads. Any university, government agency or company is eligible to purchase payload accommodations on the December 2013 flight.

“To get their sensors and experiments to the lunar surface, researchers have had to propose entire missions to space agencies such as NASA or the European Space Agency,” said David Gump, president. “This initiative allows engineers and scientists to focus on just their own instruments, with Astrobotic providing the delivery and support utilities like power and communications. They can buy just what they need from us by the pound, watt, and byte.”

Last month Astrobotic announced that it has signed a contract with SpaceX to launch its mission on a Falcon 9 rocket, the same vehicle that NASA will use to send supplies to the International Space Station. The Falcon 9 will throw the Astrobotic spacecraft into a lunar trajectory for a four-day cruise to the Moon. The spacecraft (comprised of a lander and a rover) then will enter lunar orbit before rocketing down to the surface near the historic Apollo 11 site.

The initial December 2013 expedition to an equatorial Apollo site will be followed in July 2015 with a robot prospector roaming the Moon’s south pole looking for the richest concentrations of frozen water, methane, and other volatiles.

AstroboticTM expeditions deliver payloads, scientific instruments and engineering experiments to the Moon for space agencies, academic researchers and the media/marketing industries. NASA awarded the company a $10 million contract in 2010 for access to the expedition’s engineering data on lunar landing technologies. The company also has a NASA assignment to design a lunar mining robot to recover the frozen volatiles at the poles, which can be transformed into propellant to refuel spacecraft for their return to Earth. Other expeditions will explore “skylight” holes and lunar caves as havens from temperature extremes, radiation exposure and micrometeorite bombardment. Astrobotic also plans a robot to circle the moon, outrunning lunar sundown and avoiding the immobilizing cold of the two-week night. More information is available at www.astrobotic.net.