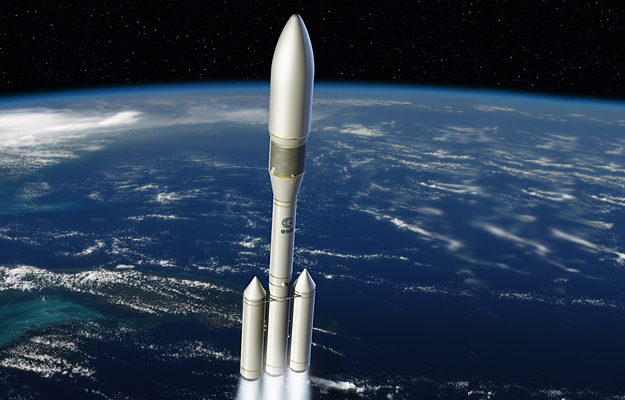 The European Space Agency (ESA) has awarded Astrium, Europe’s leading space technology company, O108 million worth of prime contractor agreements covering the development of the Ariane 6 and Ariane 5 ME launchers. The contracts follow on from the decisions reached at the ESA Ministerial Council meeting in Naples on 20-21 November 2012.

Under these contracts, Astrium will launch the initial definition and feasibility studies for the future Ariane 6 European launcher. Expected to run for six months, the study phase aims to identify the concept and architecture for Ariane 6 and will set out the new launcher’s main specifications prior to its industrial development.

An outline of Ariane 6’s design has already been established: it will be a modular rocket with a payload capacity of 3 to 6.5 metric tons in geostationary orbit. Dubbed PPH, the launcher’s configuration comprises two lower stages in which solid propellant is used and a cryogenic upper stage powered by a Vinci(R) restartable engine, developed by Snecma (Safran Group). The task now facing Astrium is to study the various possible PPH configurations and propose the best solution for meeting the programme’s technical and scheduling objectives, while also keeping to the target budget (O70 million per launch) and achieving the same reliability as Ariane 5.

Together with its industrial partners, Astrium will also continue development of Ariane 5 ME (Midlife Evolution), the modernised version of Ariane 5, which will boost launch capacity by 20% compared to the existing launcher and for the same price, meaning costs are reduced by 20% per kilogram. At their Naples meeting, ministers from ESA member states confirmed its development with a view to a maiden flight scheduled for 2017 or 2018. Astrium must now adapt the programme in line with the decisions taken by the Ministerial Council, a process that will involve taking the synergies with the Ariane 6 programme into consideration, and working towards the earliest possible date for its entry into service.

This will allow Astrium to organise the development of the elements that Ariane 5 ME and Ariane 6 have in common, including the Vinci(R) restartable engine for the upper stage of both launchers, and to identify all possible synergies between the two programmes.

“The European Space Agency has renewed its faith in us as prime contractor by signing these contracts to deliver on the decisions reached at the ESA Ministerial Council meeting in Naples,” said Alain Charmeau, CEO of Astrium Space Transportation. “The studies for the industrial development of Ariane 6 will pave the way for this truly next generation launcher. Manufacturing of Ariane 5 ME will begin immediately, and with more than three years work already completed by us we are on target for the first flight in five years’ time.”

The prime contractor of the Ariane 5 European launcher since 2003, Astrium oversees an industrial network comprising more than 550 companies (over 20% of them SMEs) in 12 European countries. Thanks to the expertise the company has acquired and the investments it has made in this near 10 year period, Ariane 5 has become the most reliable commercial launcher on the global market and has increased its geostationary orbit payload capacity by nearly one metric ton.

Astrium is the number one company in Europe for space technologies and the third in the world. In 2011, Astrium had a turnover close to O5 billion and 18,000 employees worldwide, mainly in France, Germany, the United Kingdom, Spain and the Netherlands. Astrium is the sole European company that covers the whole range of civil and defence space systems and services.

Astrium is a wholly owned subsidiary of EADS, a global leader in aerospace, defence and related services. In 2011, the Group – comprising Airbus, Astrium, Cassidian and Eurocopter – generated revenues of O 49.1 billion and employed a workforce of over 133,000.