By SpaceRef Editor
October 23, 2017
Filed under Astrophysics, nova, US 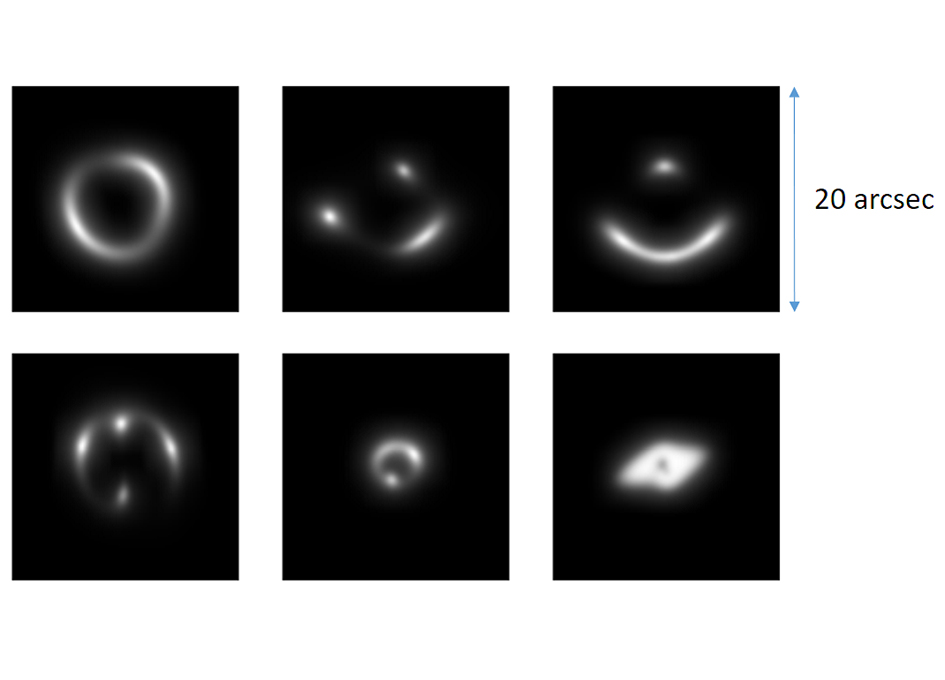 With the help of artificial intelligence, astronomers discovered 56 new gravity lens candidates. This picture shows a sample of the handmade photos of gravitational lenses that the astronomers used to train their neural network. (c) Enrico Petrillo (Rijksuniversiteit Groningen)

A group of astronomers from the universities of Groningen, Naples and Bonn has developed a method that finds gravitational lenses in enormous piles of observations. The method is based on the same artificial intelligence algorithm that Google, Facebook and Tesla have been using in the last years. The researchers published their method and 56 new gravitational lens candidates in the November issue of Monthly Notices of the Royal Astronomical Society.

When a galaxy is hidden behind another galaxy, we can sometimes see the hidden one around the front system. This phenomenon is called a gravitational lens, because it emerges from Einstein’s general relativity theory which says that mass can bend light. Astronomers search for gravitational lenses because they help in the research of dark matter.

The hunt for gravitational lenses is painstaking. Astronomers have to sort thousands of images. They are assisted by enthusiastic volunteers around the world. So far, the search was more or less in line with the availability of new images. But thanks to new observations with special telescopes that reflect large sections of the sky, millions of images are added. Humans cannot keep up with that pace.

To tackle the growing amount of images, the astronomers have used so-called ‘convolutional neural networks.’ Google employed such neural networks to win a match of Go against the world champion. Facebook uses them to recognize what is in the images of your timeline. And Tesla has been developing self-driving cars thanks to neural networks.

The astronomers trained the neural network using millions of homemade images of gravitational lenses. Then they confronted the network with millions of images from a small patch of the sky. That patch had a surface area of 255 square degrees. That’s just over half a percent of the sky.

Initially, the neural network found 761 gravitational lens candidates. After a visual inspection by the astronomers the sample was downsized to 56. The 56 new lenses still need to be confirmed by telescopes as the Hubble space telescope.

With the help of artificial intelligence, astronomers discovered 56 new gravity lens candidates. At this picture are three of those candidates. (c) Carlo Enrico Petrillo (University of Groningen)

In the future, the researchers want to train their neural network even better so that it notices smaller lenses and rejects false ones. The final goal is to completely remove any visual inspection.

Carlo Enrico Petrillo (University of Groningen, The Netherlands), first author of the scientific publication: “This is the first time a convolutional neural network has been used to find peculiar objects in an astronomical survey. I think it will become the norm since future astronomical surveys will produce an enormous quantity of data which will be necessary to inspect. We don’t have enough astronomers to cope with this. “

The data that the neuronal network processed, came from the Kilo-Degree Survey. The project uses the VLT Survey Telescope of the European Southern Observatory (ESO) on Mount Paranal (Chile). The accompanying panoramic camera, OmegaCAM, was developed under Dutch leadership.