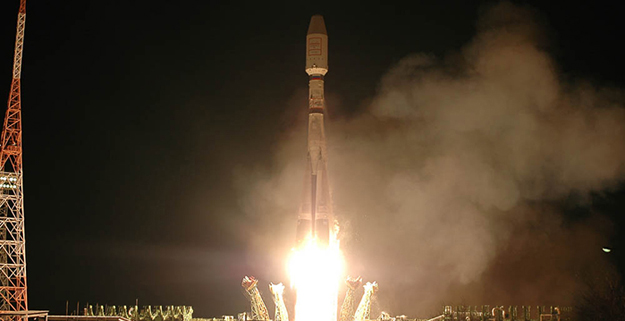 Today’s successful orbiting of six spacecraft on a Starsem Soyuz mission from Baikonur Cosmodrome marks the wrap-up of launch services currently contracted with Arianespace by Globalstar for the deployment of its second-generation constellation.

This was the fourth and final such Soyuz launch from Baikonur Cosmodrome performed on behalf of Arianespace by its Starsem affiliate, following similar missions in October 2010, July 2011 and December 2011 to fulfill Globalstar’s plan of orbiting 24 second-generation satellites. Additionally, it builds on an earlier series of eight Soyuz flights conducted by Starsem from 1999 to 2007, which deployed 32 of Globalstar’s first-generation spacecraft.

Jean-Yves Le Gall, the Chairman & CEO of Arianespace and Starsem, noted that the initial Soyuz mission for Globalstar occurred almost exactly 14 years ago – on February 9, 1999 – making this provider of mobile satellite voice and data services the first-ever customer for Starsem’s commercial launch services with the Russian-built vehicle.

“I would like to express my sincere appreciation to Globalstar for its constant confidence and support,” Le Gall said. “Globalstar and Starsem have definitely formed close ties together on the path to success.”

He also thanked the program partners, including Astrium; Russia’s Roscosmos, TsSKB-Progress, NPO-Lavotchkin and KBOM; along with the teams at Starsem and Arianespace for today’s close-out success. “Once again, we have demonstrated that Soyuz and its Fregat upper stage represent an extremely reliable launch system and the workhorse for satellite constellation deployments! Bravo!”

Globalstar’s second-generation spacecraft deployed by Soyuz weighed approximately 700 kg. each, and are three-axis-stabilized satellites built by Thales Alenia Space. They are fitted with 16 transponders operating from C-band to S-band, along with 16 receivers from L-band to C-band. Their 15-year design life is twice that of Globalstar’s predecessor first-generation spacecraft, which weighed some 450 kg. each.

The modernized Soyuz utilized by Starsem to loft Globalstar’s second-generation payloads is the same basic vehicle as employed by Arianespace in operations with the medium-lift launcher from the Spaceport in French Guiana.

Today’s mission was the 26th Starsem launch since its February 1999 maiden liftoff. In addition to deploying the Globalstar constellations, Starsem flights have lofted the Metop-A and Metop-B meteorological spacecraft, the GIOVE-A and GIOVE-B experimental navigation satellites, the Radarsat-2 radar-based Earth observation platform, the Corot and Cluster II scientific spacecraft, the Mars Express and Venus Express interplanetary probes, the Amos 2 and Galaxy 14 telecommunications satellites, and the IRDT (Inflatable Reentry and Descent Technology) demonstrator.