Anomaly with the Suzaku Onboard Equipment (XRS)

The Japan Aerospace Exploration Agency (JAXA) has been carrying out initial operations of the “Suzaku” including turning on the observation equipment after completing the solar array paddle deployment, three-axis control mode establishment, and X-ray telescope extension. On August 8, JAXA found the following anomaly in one of the three sets of onboard observation equipment, the X-ray Spectrometer (XRS), which was developed in cooperation with NASA and other organizations. JAXA launched the Suzaku, the 23rd scientific satellite (ASTRO-EII), at 12:30 p.m. on July 10, 2005, Japan Standard Time (JST), from the Uchinoura Space Center.

The XRS is structured to cool down its X-ray micro-calorimeter (or the detector) through freezing to the absolute temperature of 60 milli-degrees (or minus 273.09 degrees Celsius) for its operations. The freezer is further wrapped by liquid helium and solid neon. In the early stage, the cooling equipment was smoothly prepared for the operation, and the detector successfully reached 60 milli-degrees, which is a world record for a low temperature, and X-ray spectrum performance was verified as being scheduled. However, on August 8, we found that all loaded liquid helium had evaporated. As a result of this anomaly, the detector cannot be cooled down; therefore, the scheduled observations will be very difficult to carry out. The cause of the anomaly is currently under investigation.

The other onboard observation equipment is in good shape and under preparation. It will be ready for observations soon. 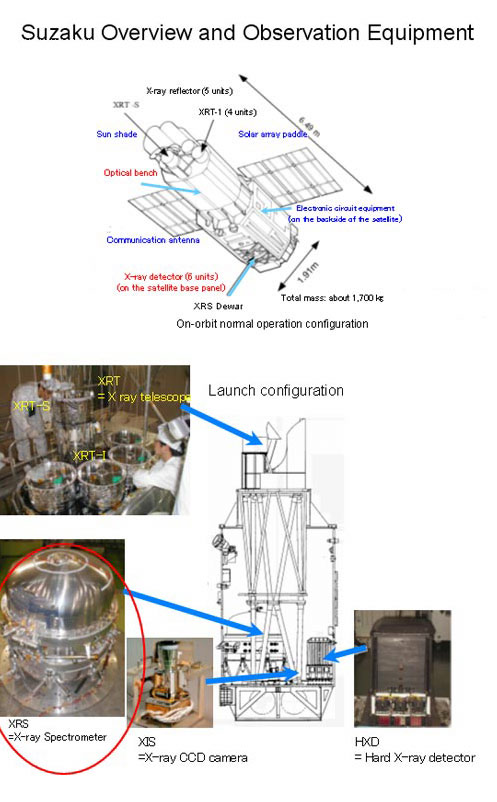