An Exploding Star in an “Exploding” Galaxy

By SpaceRef Editor
May 27, 2009
Filed under Europe, Max Planck Institute

An Exploding Star in an “Exploding” Galaxy

An international team of radio astronomers have discovered the secret explosion of a massive star, a new supernova, in the nearby galaxy M82. Despite being the closest supernova discovered in the last five years, the explosion is exclusively detectable at radio wavelengths since the dense gas and dust surrounding the exploding star leave it invisible in other wavebands. Without the obscuration, this explosion would have been visible even with amateur telescopes. The results are published in this week’s release of Astronomy & Astrophysics Letters.

M82 is an irregular galaxy in a nearby galaxy group located 12 million light-years from Earth. Despite being smaller than the Milky Way, it harbors a vigorous central starburst in the inner few hundred light-years. In this stellar factory more stars are presently born than in the entire Milky Way. M82 is often called an ‘exploding galaxy’, because it looks as if being torn apart in optical and infrared images as the result of numerous supernova explosions from massive stars (see Fig. 1, left). Many remnants from previous supernovae are seen on radio images of M82 and a new supernova explosion was long overdue. For a quarter of century astronomers have tried to catch this cosmic catastrophe in the act and have started to wonder why the galaxy has been so silent in recent years. 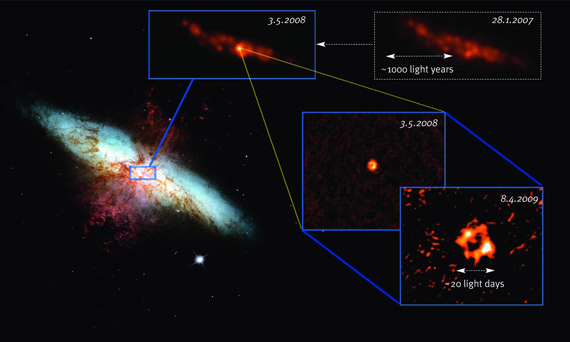 Zooming into the center of the galaxy M82, one of the nearest starburst galaxies at a distance of only 12 Million light years. The left image, taken with the Hubble Space Telescope (HST), shows the body of the galaxy in blue and hydrogen gas breaking out from the central starburst in red. The VLA image (top left) clearly shows the supernova (SN 2008iz), taken in May 2008. The high-resolution VLBI images (lower right) shows an expanding shell at the scale of a few light days and proves the transient source as the result of a supernova explosion in M82. Graphics: Milde Science Communication, HST Image: /NASA, ESA, and The Hubble Heritage Team (STScI/AURA); Radio Images: A. Brunthaler, MPIfR. (Click image for higher resolution).

The new discovery was first made in April 2009 when the MPIfR’s Dr. Andreas Brunthaler examined data just taken (on April 8) with the Very Large Array (VLA) of the National Radio Astronomy Observatory, an interferometer of 27 identical 25-meter telescopes in New Mexico, USA. “I then looked back into older data we had from March and May last year, and there it was as well, outshining the entire galaxy!”, he says (see Fig 1, top). Observations taken before 2008 showed neither pronounced radio nor X-ray emission at the position of this supernova.

On the other hand, observations of M82 taken last year with optical telescopes to search for new supernovae showed no signs of this explosion. Furthermore, the supernova is hidden on ultraviolet and X-ray images. The supernova exploded close to the center of the galaxy in a very dense interstellar environment. This could also reveal the mystery about the long silence of M82: many of these events may actually be something like “underground explosions”, where the bright
flash of light is covered under huge clouds of gas and dust and only radio waves can penetrate this dense material. “This cosmic catastrophe shows that using our radio telescopes we have a front-row seat to observe the otherwise hidden universe”, Prof. Heino Falcke from Radboud University/Nijmegen & ASTRON explains. If not obscured, the explosion could have been visible even in a medium-sized amateur telescope.

Radio emission can be detected only from core collapse supernovae, where the core of a massive star collapses and produces a black hole or a neutron star. It is produced when the shock wave of the explosion propagates into dense material surrounding the star, usually material that was shed from the massive progenitor star before it exploded.

By combining data from the 10 telescopes of the Very Long Baseline Array (VLBA), the VLA, the Green Bank Telescope in the USA, and the Effelsberg 100-meter telescope in Germany, using the technique of Very Long Baseline Interferometry (VLBI), the team was able to produce images that show a ring-like structure expanding at more than 40 million km/h or 4% of the speed of light, typical for supernovae. “By extrapolating this expansion back in time, we can estimate the explosion date. Our current data indicate that the star exploded in late January or early February 2008.”, explains Dr. Andreas
Brunthaler.

Only three months after the explosion, the ring was already 650 times larger than Earth’s orbit around the Sun (Fig 1, right). It takes the extremely sharp view of VLBI observations to resolve this structure which is as large as a 1 Euro coin seen from a distance of 13,000 km.

The asymmetric appearance of the supernova on the VLBI images indicates also that either the explosion was highly asymmetric or the surrounding material unevenly distributed. “Using the super sharp vision of VLBI we can follow the supernova expanding into the dense interstellar medium of M82 over the coming years and gain more insight on it and the explosion itself.”, says Prof. Karl Menten, director at the MPIfR.

Discoveries like this supernova will be routine with the next generation of radio telescopes, such as the Low Frequency Array (LOFAR) which is currently under construction in Europe, the Allen Telescope Array (ATA) in the USA, or the planned Square Kilometer Array (SKA). These will have the capability to observe large parts of the sky continuously.