An Exoplanet Has Been Seen Moving Around Its Host Star

For the first time, astronomers have been able to directly follow the motion of an exoplanet as it moves from one side of its host star to the other. The planet has the smallest orbit so far of all directly imaged exoplanets, lying almost as close to its parent star as Saturn is to the Sun. Scientists believe that it may have formed in a similar way to the giant planets in the Solar System. Because the star is so young, this discovery proves that gas giant planets can form within discs in only a few million years, a short time in cosmic terms.

Only 12 million years old, or less than three-thousandths of the age of the Sun, Beta Pictoris is 75% more massive than our parent star. It is located about 60 light-years away towards the constellation of Pictor (the Painter) and is one of the best-known examples of a star surrounded by a dusty debris disc [1]. Earlier observations showed a warp of the disc, a secondary inclined disc and comets falling onto the star. “Those were indirect, but tell-tale signs that strongly suggested the presence of a massive planet, and our new observations now definitively prove this,” says team leader Anne-Marie Lagrange. “Because the star is so young, our results prove that giant planets can form in discs in time-spans as short as a few million years.” 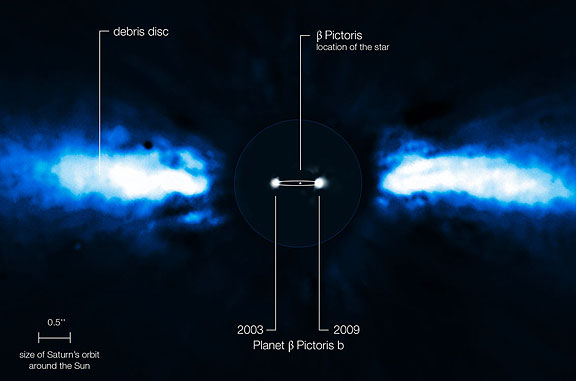 Recent observations have shown that discs around young stars disperse within a few million years, and that giant planet formation must occur faster than previously thought. Beta Pictoris is now clear proof that this is indeed possible.

The team used the NAOS-CONICA instrument (or NACO [2]), mounted on one of the 8.2-meter Unit Telescopes of ESO’s Very Large Telescope (VLT), to study the immediate surroundings of Beta Pictoris in 2003, 2008 and 2009. In 2003 a faint source inside the disc was seen (eso0842), but it was not possible to exclude the remote possibility that it was a background star. In new images taken in 2008 and spring 2009 the source had disappeared! The most recent observations, taken during autumn 2009, revealed the object on the other side of the disc after a period of hiding either behind or in front of the star (in which case it is hidden in the glare of the star). This confirmed that the source indeed was an exoplanet and that it was orbiting its host star. It also provided insights into the size of its orbit around the star.

Images are available for approximately ten exoplanets, and the planet around Beta Pictoris (designated “Beta Pictoris b”) has the smallest orbit known so far. It is located at a distance between 8 and 15 times the Earth-Sun separation — or 8-15 Astronomical Units — which is about the distance of Saturn from the Sun. “The short period of the planet will allow us to record the full orbit within maybe 15-20 years, and further studies of Beta Pictoris b will provide invaluable insights into the physics and chemistry of a young giant planet’s atmosphere,” says student researcher Mickael Bonnefoy.

The planet has a mass of about nine Jupiter masses and the right mass and location to explain the observed warp in the inner parts of the disc. This discovery therefore bears some similarity to the prediction of the existence of Neptune by astronomers Adams and Le Verrier in the 19th century, based on observations of the orbit of Uranus.

“Together with the planets found around the young, massive stars Fomalhaut and HR8799, the existence of Beta Pictoris b suggests that super-Jupiters could be frequent byproducts of planet formation around more massive stars,” explains Gael Chauvin, a member of the team.

Such planets disturb the discs around their stars, creating structures that should be readily observable with the Atacama Large Millimeter/submillimeter Array (ALMA), the revolutionary telescope being built by ESO together with international partners.

A few other planetary candidates have been imaged, but they are all located further from their host star than Beta Pictoris b. If located in the Solar System, they all would lie close to or beyond the orbit of the furthest planet, Neptune. The formation processes of these distant planets are likely to be quite different from those in our Solar System and in Beta Pictoris.

“The recent direct images of exoplanets — many made by the VLT– illustrate the diversity of planetary systems,” says Lagrange. “Among those, Beta Pictoris b is the most promising case of a planet that could have formed in the same way as the giant planets in our Solar System.”

[1] Debris discs are composed of dust resulting from collisions among larger bodies such as planetary embryos or asteroids. They are larger versions of the zodiacal dust band in our Solar System. The disc around Beta Pictoris was the first to be imaged and is now known to extend up to about 1000 times the distance between the Earth and the Sun.

[2] NACO is an adaptive optics instrument attached to ESO’s Very Large Telescope, located in Chile. Thanks to adaptive optics, astronomers can remove most of the blurring effect of the atmosphere and obtain very sharp images.

Full text of this press release, images, and videos: http://www.eso.org/public/news/eso1024/

This research was presented in a paper to appear this week in the journal Science (“A Giant Planet Imaged in the disk of the Young Star Beta Pictoris,” by A.-M. Lagrange et al.).