NJIT Distinguished Professor Philip R. Goode and the Big Bear Solar Observatory (BBSO) team have achieved “first light” using a deformable mirror in what is called adaptive optics at Big Bear Solar Observatory (BBSO). Using this equipment, an image of a sunspot was published yesterday on the website of Ciel et l’Espace, as the photo of the day: http://www.cieletespace.fr/node/5752

“This photo of a sunspot is now the most detailed ever obtained in visible light,” according to Ciel et l’Espace. In September, the publication, a popular astronomy magazine, will publish several more photos of the Sun taken with BBSO’s new adaptive optics system.

Goode said that the images were achieved with the 1.6 m clear aperture, off-axis New Solar Telescope (NST) at BBSO. The telescope has a resolution covering about 50 miles on the Sun’s surface. The telescope is the crown jewel of BBSO, the first facility-class solar observatory built in more than a generation in the U.S. The instrument is undergoing commissioning at BBSO.

Since 1997, under Goode’s direction, NJIT has owned and operated BBSO, located in a clear mountain lake. The mountain lake is characterized by sustained atmospheric stability, which is essential for BBSO’s primary interests of measuring and understanding solar complex phenomena utilizing dedicated telescopes and instruments.

The images were taken by the NST with atmospheric distortion corrected by its 97 actuator deformable mirror. By the summer of 2011, in collaboration with the National Solar Observatory, BBSO will have upgraded the current adaptive optics system to one utilizing a 349 actuator deformable mirror. With support from the National Science Foundation (NSF), Air Force Office of Scientific Research, NASA and NJIT, the NST began operation in the summer of 2009. Additional support from NSF was received a few months ago to fund further upgrades to this new optical system.

The NST will be the pathfinder for an even larger ground-based telescope, the Advanced Technology Solar Telescope (ATST), to be built over the next decade. NJIT is an ATST co-principal investigator on this NSF project. The new grant will allow Goode and partners from the National Solar Observatory (NSO) to develop a new and more sophisticated kind of adaptive optics, known as multi-conjugate adaptive optics (MCAO). 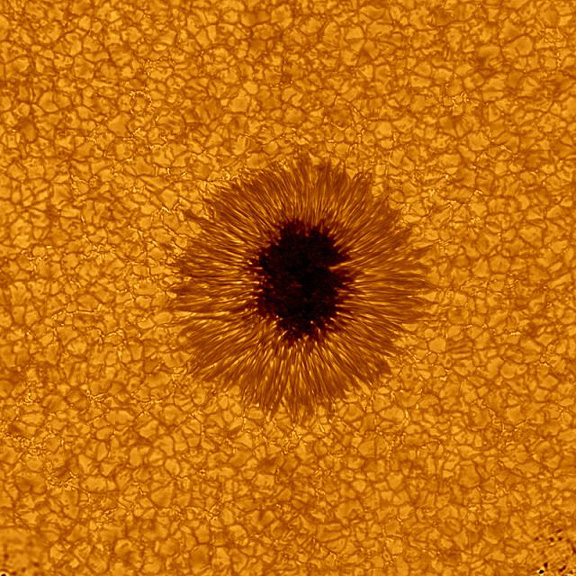 The new optical system will allow the researchers to increase the distortion-free field of view to allow for better ways to study these larger and puzzling areas of the Sun. MCAO on the NST will be a pathfinder for the optical system of NSO’s 4-meter aperture ATST coming later in the decade. Scientists believe magnetic structures, like sunspots hold an important key to understanding space weather. Space weather, which originates in the Sun, can have dire consequences on Earth’s climate and environment. A bad storm can disrupt power grids and communication, destroy satellites and even expose airline pilots, crew and passengers to radiation.

The new telescope now feeds a high-order adaptive optics system, which in turn feeds the next generation of technologies for measuring magnetic fields and dynamic events using visible and infrared light. A parallel computer system for real-time image enhancement highlights it. Goode and BBSO scientists have studied solar magnetic fields for many years. They are expert at combining BBSO ground-based data with satellite data to determine dynamic properties of the solar magnetic fields.