ALMA Turns Its Eyes to Centaurus A

By SpaceRef Editor
May 31, 2012
Filed under Astrophysics, National Radio Astronomy Observatory, US 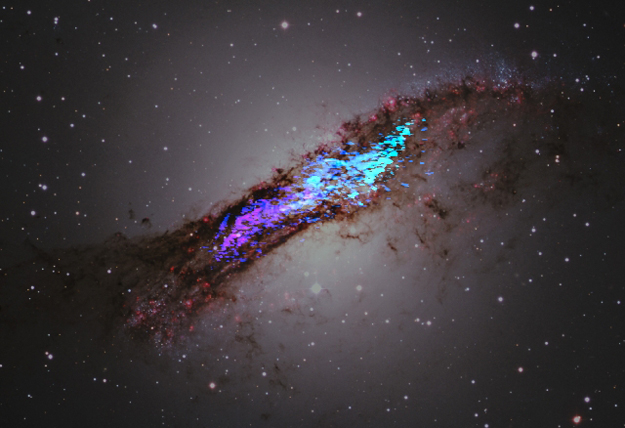 A new image of the center of the distinctive galaxy Centaurus A, made with the Atacama Large Millimeter/submillimeter Array (ALMA), shows how the new telescope, which is still under construction, allows astronomers to see with unprecedented quality through the opaque dust lanes that obscure the galaxy’s center.

Centaurus A is a massive elliptical “radio galaxy,” (a galaxy that emits strong radio waves) and is the most prominent, as well as the nearest, radio galaxy in the sky. Its very luminous center hosts a supermassive black hole with a mass of about 100 million times that of the Sun.

As seen in visible light, a dark dusty band obscures the galaxy’s center. This dust lane harbors large amounts of gas, dust and young stars. These features, together with the strong radio emission, indicate that Centaurus A is the result of a collision between a giant elliptical galaxy and a smaller spiral galaxy.

To see through the obscuring dust in the central band, astronomers need to observe using longer wavelengths of light, such as infrared light or radio waves.

The new ALMA observations, shown in a gradation of blue in this image, reveal the position and motion of clouds of gas in the galaxy. They are the sharpest and most sensitive such observations ever made. ALMA was tuned to detect signals with a wavelength around 1.3 millimeters, emitted by molecules of carbon monoxide gas. The motion of the gas in the galaxy causes slight changes to this wavelength, shown in this image as changes in color. Violet and dark-blue features trace gas coming towards us, while light-blue features depict gas moving away. We can see that the gas to the left of the center is moving towards us, while the gas to the right of the center is moving away from us, indicating that the gas is orbiting around the galaxy.

The millimeter wavelength observations were made using super-sensitive radio receivers built by the National Radio Astronomy Observatory. In this image the ALMA observations are overlaid on an optical image of Centaurus A produced by the MPG/ESO 2.2-meter telescope at ESO’s La Silla Observatory in Chile.

Construction of ALMA, on the Chajnantor Plateau in northern Chile, will be completed in 2013, when 66 high-precision antennas will be fully operational. Half of the antennas already are installed. Early scientific observations with a partial array began in 2011, and already are producing outstanding results. The ALMA observations of Centaurus A shown here were taken during the telescope’s Commissioning and Science Verification phase.

The Atacama Large Millimeter/submillimeter Array (ALMA), an international astronomy facility, is a partnership of Europe, North America and East Asia in cooperation with the Republic of Chile.

The National Radio Astronomy Observatory, the North American executive for the ALMA project, is a facility of the National Science Foundation, operated under cooperative agreement by Associated Universities, Inc.