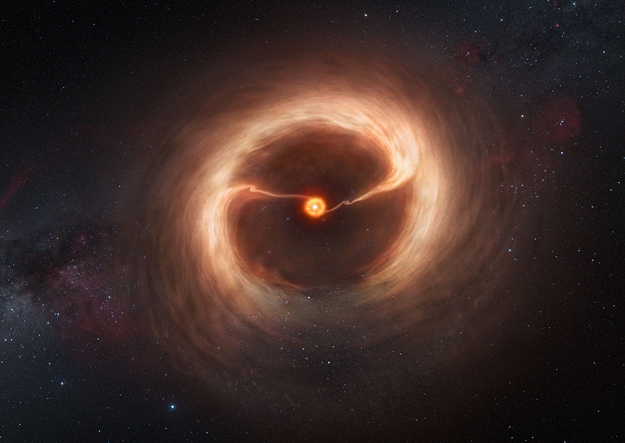 Astronomers using the Atacama Large Millimeter/submillimeter Array (ALMA) telescope have seen a key stage in the birth of giant planets for the first time. Vast streams of gas are flowing across a gap in the disc of material around a young star. These are the first direct observations of such streams, which are expected to be created by giant planets guzzling gas as they grow. The result is published on 2 January 2013 in the journal Nature.

The international team of astronomers studied the young star HD 142527, over 450 light-years from Earth, which is surrounded by a disc of gas and cosmic dust — the remains of the cloud from which the star formed. The dusty disc is divided into an inner and an outer part by a gap, which is thought to have been carved by newly forming gas giant planets clearing out their orbits as they circle the star. The inner disc reaches from the star out to the equivalent of the orbit of Saturn in the solar system, while the outer disc begins about 14 times further out. The outer disc does not surround the star uniformly; instead, it has a horseshoe shape, probably caused by the gravitational effect of the orbiting giant planets.

According to theory, the giant planets grow by capturing gas from the outer disc, in streams that form bridges across the gap in the disc.

“Astronomers have been predicting that these streams must exist, but this is the first time we’ve been able to see them directly,” says Simon Casassus (Universidad de Chile, Chile), who led the new study. “Thanks to the new ALMA telescope, we’ve been able to get direct observations to illuminate current theories of how planets are formed!”

Casassus and his team used ALMA to look at the gas and cosmic dust around the star, seeing finer details, and closer to the star, than could be seen with previous such telescopes. ALMA’s observations, at submillimeter wavelengths, are also impervious to the glare from the star that affects infrared or visible-light telescopes. The gap in the dusty disc was already known, but they also discovered diffuse gas remaining in the gap, and two denser streams of gas flowing from the outer disc, across the gap, to the inner disc.

“We think that there is a giant planet hidden within, and causing, each of these streams. The planets grow by capturing some of the gas from the outer disc, but they are really messy eaters: the rest of it overshoots and feeds into the inner disc around the star” says Sebastian Perez, a member of the team, who is also at Universidad de Chile.

The observations answer another question about the disc around HD 142527. As the central star is still forming, by capturing material from the inner disc, the inner disc would have already been devoured, if it was not somehow topped up. The team found that the rate at which leftover gas streams onto the inner disc is just right to keep the inner disc replenished, and to feed the growing star.

Another first is the detection of the diffuse gas in the gap. “Astronomers have been looking for this gas for a long time, but so far we only had indirect evidence for it. Now, with ALMA, we can see it directly,” explains Gerrit van der Plas, another team member at Universidad de Chile.

This residual gas is more evidence that the streams are caused by giant planets, rather than even larger objects such as a companion star. “A second star would have cleared out the gap more, leaving no residual gas. By studying the amount of gas left, we may be able to pin down the masses of the objects doing the clearing.” adds Perez.

What about the planets themselves? Casassus explains that, although the team did not detect them directly, he is not surprised. “We searched for the planets themselves with state-of-the-art infrared instruments on other telescopes. However, we expect that these forming planets are still deeply embedded in the streams of gas, which are almost opaque. Therefore, there may be little chance of spotting the planets directly.”

Nevertheless, the astronomers aim to find out more about the suspected planets by studying the gas streams as well as the diffuse gas. The ALMA telescope is still under construction, and has not yet reached its full capabilities. When it is complete, its vision will be even sharper, and new observations of the streams may allow the team to determine properties of the planets, including their masses.

This research was presented in a paper, “Flows of gas through a protoplanetary gap”, to appear in the journal Nature on 2 January 2013: http://www.eso.org/public/archives/releases/sciencepapers/eso1301/eso1301a.pdf

More about ALMA at ESO: http://www.eso.org/public/teles-instr/alma.html

ESO is the foremost intergovernmental astronomy organization in Europe and the world’s most productive ground-based astronomical observatory by far. It is supported by 15 countries: Austria, Belgium, Brazil, the Czech Republic, Denmark, France, Finland, Germany, Italy, the Netherlands, Portugal, Spain, Sweden, Switzerland and the United Kingdom. ESO carries out an ambitious program focused on the design, construction and operation of powerful ground-based observing facilities enabling astronomers to make important scientific discoveries. ESO also plays a leading role in promoting and organizing cooperation in astronomical research. ESO operates three unique world-class observing sites in Chile: La Silla, Paranal and Chajnantor. At Paranal, ESO operates the Very Large Telescope, the world’s most advanced visible-light astronomical observatory and two survey telescopes. VISTA works in the infrared and is the world’s largest survey telescope and the VLT Survey Telescope is the largest telescope designed to exclusively survey the skies in visible light. ESO is the European partner of a revolutionary astronomical telescope ALMA, the largest astronomical project in existence. ESO is currently planning the 39-meter European Extremely Large optical/near-infrared Telescope, the E-ELT, which will become “the world’s biggest eye on the sky”.