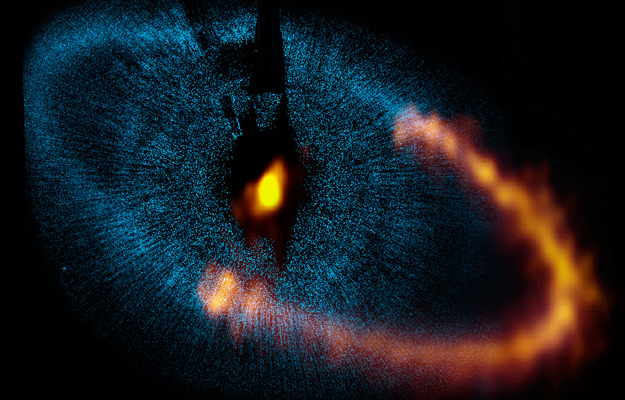 A new observatory still under construction has given astronomers a major breakthrough in understanding a nearby planetary system and provided valuable clues about how such systems form and evolve. Astronomers using the Atacama Large Millimeter/submillimeter Array (ALMA) have discovered that planets orbiting the star Fomalhaut must be much smaller than originally thought. This is the first published science result from ALMA in its first period of open observations for astronomers worldwide.

The discovery was made possible by exceptionally sharp ALMA images of a disc, or ring, of dust orbiting Fomalhaut, which lies about 25 light-years from Earth. It helps resolve a controversy among earlier observers of the system. The ALMA images show that both the inner and outer edges of the thin, dusty disc have very sharp edges. That fact, combined with computer simulations, led the scientists to conclude that the dust particles in the disc are kept within the disc by the gravitational effect of two planets — one closer to the star than the disc and one more distant [1].

Their calculations also indicated the probable size of the planets — larger than Mars but no larger than a few times the size of the Earth. This is much smaller than astronomers had previously thought. In 2008, a NASA/ESA Hubble Space Telescope image had revealed the inner planet, then thought to be larger than Saturn, the second largest planet in our Solar System. However, later observations with infrared telescopes failed to detect the planet.

That failure led some astronomers to doubt the existence of the planet in the Hubble image. Also, the Hubble visible-light image detected very small dust grains that are pushed outward by the star’s radiation, thus blurring the structure of the dusty disc. The ALMA observations, at wavelengths longer than those of visible light, traced larger dust grains — about 1 millimetre in diameter — that are not moved by the star’s radiation. They clearly reveal the disc’s sharp edges and ringlike structure, which indicate the gravitational effect of two planets.

“Combining ALMA observations of the ring’s shape with computer models, we can place very tight limits on the mass and orbit of any planet near the ring,” said Aaron Boley (a Sagan Fellow at the University of Florida, USA) who was leader of the study. “The masses of these planets must be small; otherwise the planets would destroy the ring,” he added. The small sizes of the planets explain why the earlier infrared observations failed to detect them, the scientists said.

The ALMA research shows that the ring’s width is about 16 times the distance from the Sun to the Earth, and is only one-seventh as thick as it is wide. “The ring is even more narrow and thinner than previously thought,” said Matthew Payne, also of the University of Florida.

The ring is about 140 times the Sun-Earth distance from the star. In our own Solar System, Pluto is about 40 times more distant from the Sun than the Earth. “Because of the small size of the planets near this ring and their large distance from their host star, they are among the coldest planets yet found orbiting a normal star,” added Aaron Boley.

The scientists observed the Fomalhaut system in September and October of 2011, when only about a quarter of ALMA’s planned 66 antennas were available. When construction is completed next year, the full system will be much more capable. Even in this Early Science phase, though, ALMA was powerful enough to reveal the telltale structure that had eluded earlier millimetre-wave observers.

“ALMA may be still under construction, but it is already the most powerful telescope of its kind. This is just the beginning of an exciting new era in the study of discs and planet formation around other stars”, concludes ESO astronomer and team member Bill Dent (ALMA, Chile).

[1] The effect of planets or moons in keeping a dust ring’s edges sharp was first seen when the Voyager spacecraft flew by Saturn and made detailed images of that planet’s ring system. In another example in our Solar System, one ring of the planet Uranus is confined sharply by the moons Cordelia and Ophelia, in exactly the manner the ALMA observers propose for the ring around Fomalhaut. The moons confining those planets’ rings are dubbed “shepherding moons”.

The moons or planets confining such dust rings do so through gravitational effects. A planet on the inside of the ring is orbiting the star more rapidly than the dust particles in the ring. Its gravity adds energy to the particles, pushing them outward. A planet on the ring’s outside is moving more slowly than the dust particles, and its gravity decreases the energy of the particles, making them fall slightly inward. More information

This research was presented in a paper, “Constraining the Planetary System of Fomalhaut Using High-Resolution ALMA Observations” by A. Boley et al. to appear in Astrophysical Journal Letters.

The year 2012 marks the 50th anniversary of the founding of the European Southern Observatory (ESO). ESO is the foremost intergovernmental astronomy organisation in Europe and the world’s most productive astronomical observatory. It is supported by 15 countries: Austria, Belgium, Brazil, the Czech Republic, Denmark, France, Finland, Germany, Italy, the Netherlands, Portugal, Spain, Sweden, Switzerland and the United Kingdom. ESO carries out an ambitious programme focused on the design, construction and operation of powerful ground-based observing facilities enabling astronomers to make important scientific discoveries. ESO also plays a leading role in promoting and organising cooperation in astronomical research. ESO operates three unique world-class observing sites in Chile: La Silla, Paranal and Chajnantor. At Paranal, ESO operates the Very Large Telescope, the world’s most advanced visible-light astronomical observatory and two survey telescopes. VISTA works in the infrared and is the world’s largest survey telescope and the VLT Survey Telescope is the largest telescope designed to exclusively survey the skies in visible light. ESO is the European partner of a revolutionary astronomical telescope ALMA, the largest astronomical project in existence. ESO is currently planning a 40-metre-class European Extremely Large optical/near-infrared Telescope, the E-ELT, which will become “the world’s biggest eye on the sky”. Links