By SpaceRef Editor
July 28, 2005
Filed under AirLaunch LLC, Commerce, US

AirLaunch LLC’s subcontractor HMX Inc. has completed flow calibration, ignition and initial short duration tests of a liquid oxygen and propane powered upper stage rocket engine that has application for future small spacecraft launchers such as the AirLaunch QuickReach booster. The tests were conducted from April to June of this year at the Civilian Flight Test Center, Mojave Spaceport with the support of Orion Propulsion of Huntsville, AL. 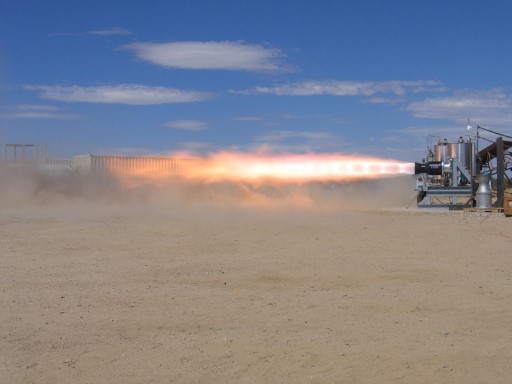 The pictured engine uses an ablative chamber and nozzle, and is designed to produce 24,000 lbs force when operating in a vacuum with an extension nozzle. The extension is not installed for sea level tests.

Testing shows that the engine is stable, can be ignited quickly after shutdown and is ready to move into the next phase of development.

Work on this engine was conducted in support of a DARPA/USAF program known as Falcon. For information about Falcon, see the DARPA website.