The PerúSAT-1 satellite, designed and built by Airbus Defence and Space, the world’s second largest space company and world leader in the export of Earth observation satellites, for the Peruvian Space Agency (CONIDA), is ready for launch from the European spaceport in Kourou, French Guiana, on 16 September 2016 03:43 CEST (20:43 Lima Time on 15 September 2016).

Constructed in a record time of less than 24 months, PerúSAT-1 is based on the highly flexible, compact AstroBus-S platform. It will be placed in a polar orbit at an altitude of approximately 695 km. Thanks to its state-of-the-art silicon carbide optical instrument system, the satellite will collect images at 70 cm resolution for use in agriculture, urban planning, border control and drug trafficking, and to support the management of humanitarian aid and the evaluation of natural disasters, among other applications. PerúSAT-1 will be the most powerful Latin American Earth observation satellite.

Following the integration campaign, PerúSAT-1 will be orbited aboard a Vega launcher, the light-lift member of Arianespace’s launcher family. This will be the seventh Vega launch overall and the first this year. The satellite has been integrated into the multi-payload dispenser, specially designed and built by Airbus Defence and Space to enable the launch of more than one satellite on a single launch. Alongside PerúSAT-1, the Vega launcher will also be carrying four optical micro-satellites that will be put in orbit in sequential order. 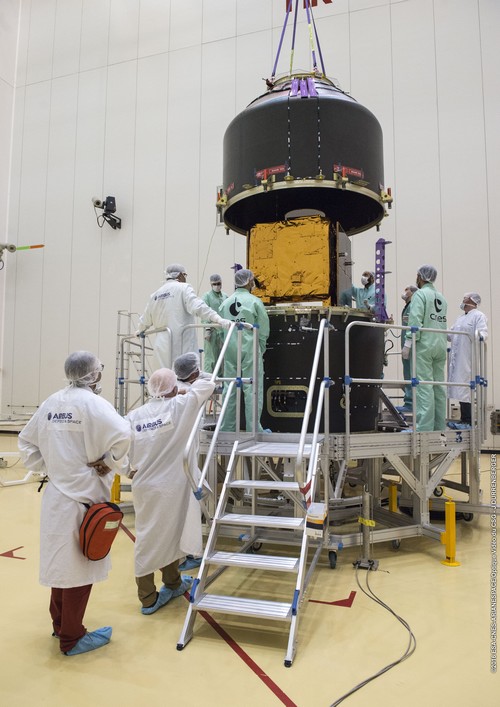 Once the satellite is launched, Airbus Defence and Space will check the solar panel deployment and sun pointing acquisition, and conduct a series of operations which include the satellite transfer to its operational orbit, the first image acquisition, carrying out the in orbit tests to ensure that all subsystems are operating properly, etc. All these will be done from the CNOIS control centre (Centro Nacional de Operaciones de Imágenes Satelitales) built by Airbus Defence and Space, in Pucusana, in the south of Lima.

After testing the good performance of the whole system, the commissioning and hand over of the PerúSAT-1 satellite system to the customer will take place by the end of the year. From this moment on, the Peruvian engineers trained in Toulouse to gain the necessary knowledge, expertise and confidence to successfully operate and maintain all of the PerúSAT-1 systems independently, will take over.

About Airbus Defence and Space

Airbus Defence and Space, a division of Airbus Group, is Europe’s number one defence and space enterprise and the second largest space business worldwide. Its activities include space, military aircraft and related systems and services. It employs more than 38,000 people and in 2015 generated revenues of over 13 billion Euros.