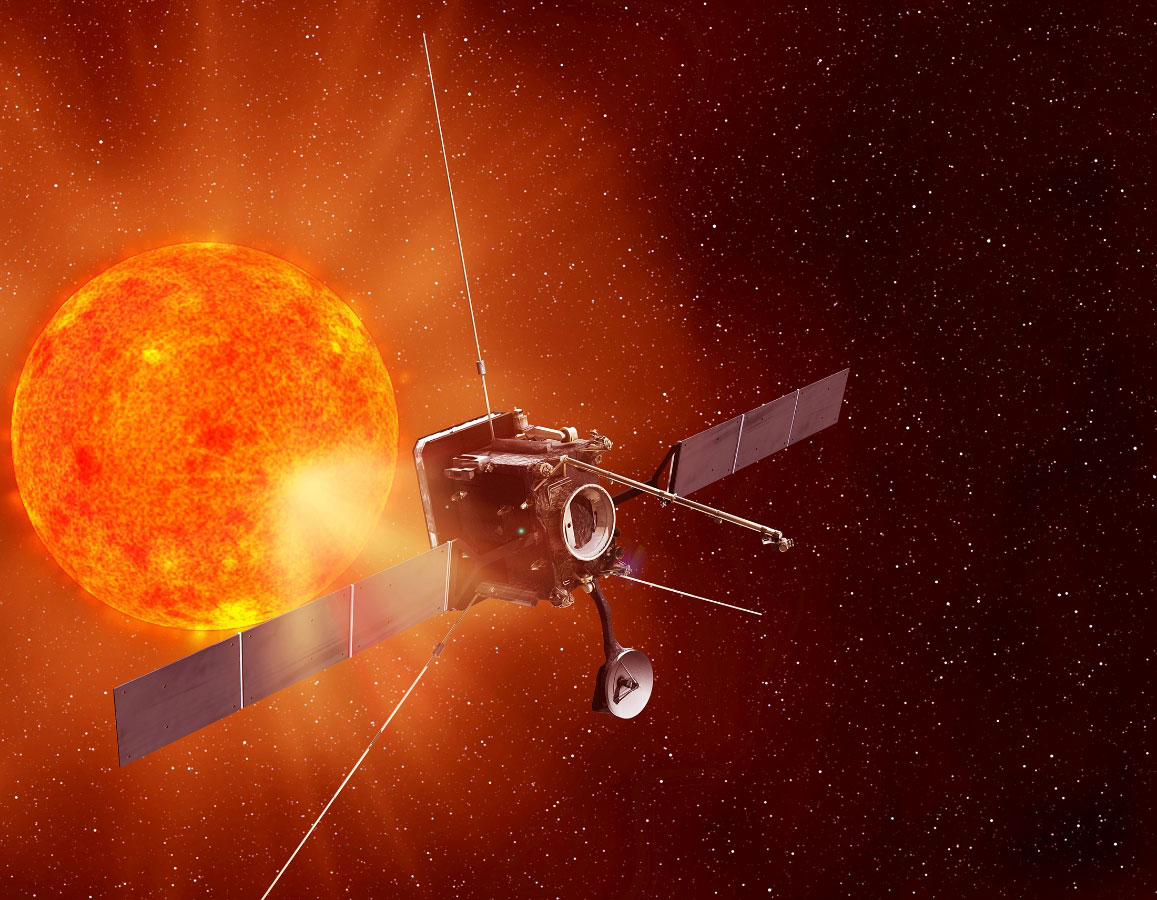 Solar Orbiter’s STM will leave Airbus Defence and Space in UK on 23rd March., to be delivered to IABG, near Munich in Germany, for mechanical testing. This is an important step in the verification phase of the project. Scheduled to be launched in 2018, the Solar Orbiter mission will study in unprecedented detail how our Sun creates and controls the heliosphere, the bubble of space filled with particles and fields in which the Earth orbits.

At the end of this three-month test campaign, the STM will be shipped back to Airbus Defence and Space in Stevenage for the Stood-Off Radiator Assemblies (SORA) to be integrated. Later in the year, it will be shipped again to IABG for thermal testing.

At its closest approach, where sunlight is thirteen times more intense than it is for satellites orbiting the Earth, the spacecraft will have to survive intense thermal radiation and protect its instrument suite, while at the same time allowing those instruments to observe the Sun. To achieve this, the design includes a Heatshield and incorporates new high-temperature Solar Array technology. Integrated to the STM, the Heatshield is made of several protective layers of titanium, the outer of which is coated with a protective skin called SolarBlack. This has been developed specifically for Solar Orbiter. Slightly oversized beyond the spacecraft body, the Heatshield will ensure that the spacecraft remains in the shadow and that the radiated heat flux received is limited.

ESA awarded Airbus Defence and Space the contract to build Solar Orbiter in April 2012. It is the first mission in ESA’s Cosmic Vision programme to start its implementation phase. Solar Orbiter builds on hugely successful missions such as SoHO and Ulysses. Like those missions, it is a collaboration between ESA and NASA, including major scientific payloads from the United States, and the provision of a launch by NASA.

The UK Space Agency is funding the UK teams who are involved in 4 out of the 10 instruments.

The spacecraft will carry a suite of complementary instruments that, during its 7 year lifetime, will measure the particles, fields and waves of the plasma through which it travels, and at the same time make observations of the Sun’s surface and outer atmosphere, the photosphere and corona.

At its closest point Solar Orbiter will be closer to the Sun than the planet Mercury, at a distance of 0.28 Astronomical Units (42 million kilometers), in an orbit that takes it out of the ecliptic plane. From here, it can perform long-duration observations of the same region of the Sun’s surface, and have visibility of the Sun’s Polar Regions. It will be one of the closest approaches of the Sun by any spacecraft. To position itself in this challenging orbit, Solar Orbiter will make a complex series of gravitational-assist fly-bys past both Earth and Venus.

Design challenges include accommodating and resourcing a large suite of cutting-edge instruments and ensuring stringent magnetic and molecular cleanliness to enable the most sensitive scientific measurements to be made effectively.

The Sun is vital for life on Earth, but can also cause major problems for satellites and Earth based systems. The Sun releases bursts of high-energy particles (Coronal Mass Ejections), which can disrupt electrical power distribution systems, cause computers to crash, damage satellites and endanger astronauts. Solar Orbiter will provide scientific data to better understand the mechanisms on the Sun that cause these violent and disruptive outbursts.

Airbus Defence and Space
Airbus Defence and Space is a division of Airbus Group formed by combining the business activities of Cassidian, Astrium and Airbus Military. The new division is Europe’s number one defence and space enterprise, the second largest space business worldwide and among the top ten global defence enterprises. It employs more than 38,000 employees generating revenues of approximately €13 billion per year.