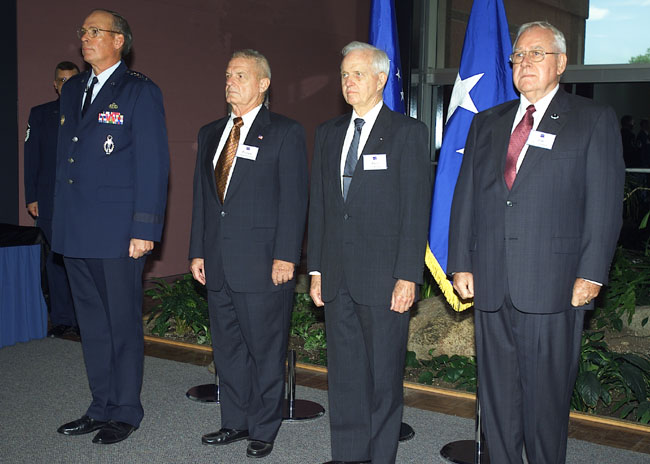 PETERSON AIR FORCE BASE, Colo. – Five men who labored in secrecy on the advancement of Air Force space and missile programs more than 30 years ago were recognized publicly with induction into the Space and Missile Pioneers Hall of Fame Aug. 29.

“We are standing on the shoulders of these pioneers,” said Gen. Lance Lord, commander of Air Force Space Command. “It is absolutely essential we recognize these great individuals.”

Begun by the National Space Club in 1989 and resurrected by the Air Force in 1997, the Space and Missile Pioneer Awards honor individuals who have made a lasting and significant contribution to Air Force space and missile programs. The 2001 ceremony was cancelled due to the events of Sept. 11, so the 2002 honorees, Coolbaugh and Baker, were joined by the 2001 honorees, McCartney, Battle and Buzard, in a joint ceremony. Baker and Battle were unable to attend due to health.

“The ceremony was a culmination of two years of work,” said Skip Bradley, Air Force Space Command historian. “This award is going to grow as the future of space is very bright.”

The newest inductees are the most recent in a small fraternity of 18 living pioneers who can wear the official emblem of the Air Force Space and Missile Pioneers, presented at the ceremony. Those 18 pioneers are the only people in the world authorized to wear the emblem.

Coolbaugh, Baker and Buzard excelled in the sensitive area of photoreconnaissance, the precursor for today’s space surveillance systems. McCartney was integral to the growth of ballistic missile programs, and Battle established the Discoverer/Corona, a satellite imaging program. Lord noted much of each pioneer’s work was done in secrecy due to the sensitive yet groundbreaking nature of his research and development.

“Even our wives didn’t know what we were doing,” Coolbaugh said. “This award isn’t the kind of thing we anticipated; we were just doing what we were supposed to do.”

Schriever, credited with the development of the intercontinental ballistic missile, said at the ceremony that the advancement of his and his peers’ ideas contributed toward deterring war. The 91-year-old retired general is the only living military dignitary to have a base named after him. Schriever AFB is eight miles east of Peterson.

Both the ceremony and the induction brought out feelings of pride and appreciation for the investments the pioneers made in Air Force space and missile programs.

“We promise we won’t let you down; we will continue to climb,” Lord said.