After a Fire, Before a Flood: NASA’s Landsat Directs Restoration to At-Risk Areas 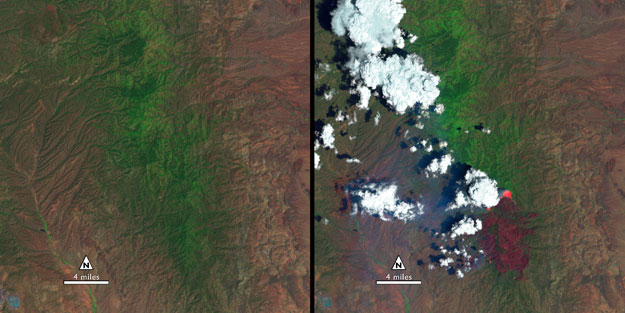 The “before” image (left) is a false-color Landsat 8 image acquired May 28, 2013. The “during” image was acquired, June 13, 2013, while the New Mexico Silver Fire was still growing. (The white puffs with black shadows in the right image are clouds.) Image Credit: USGS/NASA.

While the 138,000-acre Silver Fire still smoldered, forest restoration specialists were on the job. They analyzed maps created using Landsat satellite data to determine where the burn destroyed vegetation and exposed soil – and where to focus emergency restoration efforts.

Red means high-severity fire, she explained – and the red areas were concentrated in a watershed drainage that fed communities west of Las Cruces, N.M. So crews got to work. The Burned Area Emergency Response, or BAER, teams are designed to go in as soon as the flames die down to help protect reservoirs, watersheds and infrastructure from post-fire floods and erosion. And Landsat satellites, built by NASA and operated by the U.S. Geological Survey, help direct the crews to those forest areas needing attention.

As a wildfire starts to die down, fire managers like Luehring can contact the Forest Service’s Remote Sensing Applications Center in Salt Lake City to request maps that identify the high, moderate and low severity burns. When that call comes in, remote sensing specialist Carl Albury finds satellite imagery of the burned forest both pre- and post-fire. 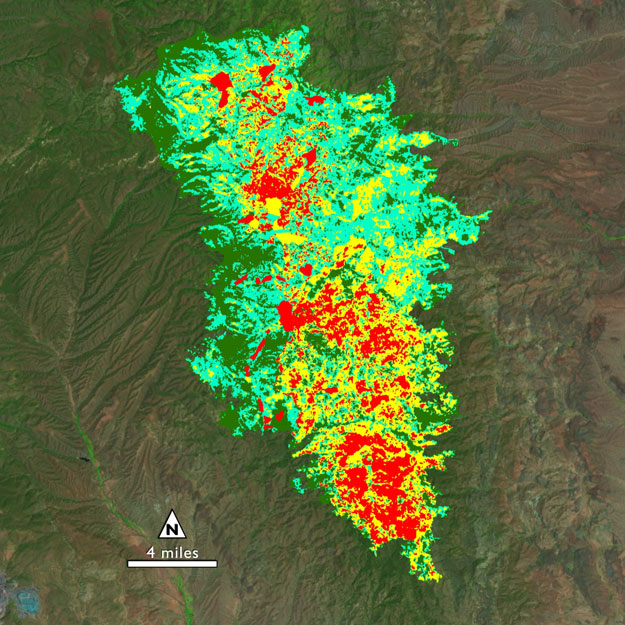 In Landsat images, he looks at two of the 11 spectral bands – the near-infrared band and a short-wave infrared band.

“The near infrared reflects well from healthy vegetation, and the short-wave infrared bands reflect well from exposed ground,” Albury said. “By comparing the normalized ratio of the near- and shortwave-infrared bands in the pre-fire image to the post-fire image, we can estimate the burn severity.”

The near-infrared wavelength bounces off of healthy plant cells, and so sends back a strong signal to the Landsat detector that isn’t present over burned areas, explained Jeff Masek, Landsat program scientist with NASA’s Goddard Space Flight Center in Greenbelt, Md. But the shortwave infrared band – added to Landsat satellites starting with Landsat 4 – has a distinct spectral signature for burned areas.

“The char will show up very clearly in the shortwave,” Masek said.

Albury takes a ratio of the two spectral bands, both before and after a fire. Comparing those ratios, he creates a rough map of fire severity, called the Burned Area Reflectance Classification, or BARC. The BAER teams calibrate or adjust the maps based on on-the-ground observations, and then use them to plan time-sensitive restoration projects.

“Without the BARC product the only way for them to assess the fire is on foot or by helicopter,” Albury said, noting that doing so is often infeasible for large fires on remote terrain. “It gives them a sense for how much they need to do, and where they need to do it.”

While he also employs remote sensing data from other satellites, Landsat is the satellite of choice, Albury said. That’s because of the coverage of its spectral bands as well as the free availability of the images – he can sort through to find cloud-free views of that forest at a similar time in the growing season for the pre-fire comparison. And with Landsat 8 online this summer, the new images don’t have the gaps present in Landsat 7 imagery. Plus, having two satellites orbiting halves the wait time for post-fire images.

“Now I’ve got those good, clean, gap-free scenes on a regular basis,” Albury said. “That makes an enormous difference for me and for the BAER teams.” He’s counting on Landsat 8 being closely calibrated to Landsat 7, he said, so he can compare a pre-fire Landsat 8 image with a post-fire Landsat 7 version, or vice versa.

It’s one of the reasons why the Landsat team focused on calibrating Landsat 8 so the reflectance data it gathers is measuring landcover and surface properties exactly the same as its predecessors did, Masek said.

“You want to make sure that the same value means the same thing over time and between instruments,” he said. “Otherwise, you have to treat each image as a separate problem.”

Albury estimates he creates maps for about 100 fires each fire season. For some fires, like the Silver Fire, he creates maps even before the fire is contained so that crews can get to work as quickly as possible.

“The whole basis for this is the need for speed,” Luehring of the BAER recovery program said. “In the southwest and southern California, there’s pretty much anywhere from four to six weeks after fire season before it starts to rain and flood. If we’re going to put anything in place that has a chance of holding back water, or controlling or mitigating the effects of water, we have to do it right away.”

The teams focus on areas at “unacceptable risk,” she said, which typically means that post-fire flooding would damage communities, watersheds and infrastructure. They identify those risky areas with a combination of the Landsat-derived maps, reports from the field, and topographical maps that identify steep slopes and watersheds.

After the Silver Fire, for example, they identified severely burned areas upstream of a community, campgrounds and forest roads. So crews scattered barley seeds over 11,000 acres, dropped mulch on 800 acres, closed off roads, storm-proofed forest roads, and pumped toilets at risk of flooding.

“It’s all hinged on the burn severity map,” Luehring said. “It’s how you figure out what the watershed response is going to be.”