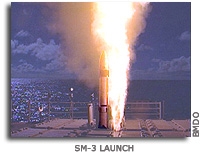 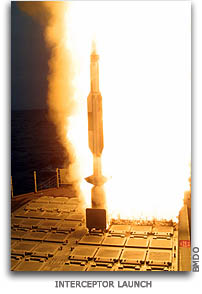 The primary objective of this test was to demonstrate the Aegis BMD
system capability to intercept the ballistic missile target in the ascent
phase of flight. Extensive engineering evaluation data was collected
for analyses in preparation for future flight tests. Project officials
will evaluate the data and incorporate changes as required.

With the success of the FM-3 flight test on June 13, 2002, the Aegis
BMD project has accelerated its flight-testing objectives. FM-4 marks
the beginning of a six flight test series to develop an emergency deployment
sea based ballistic missile defense against short to medium range ballistic
missiles. FM-4 is the first developmental flight test against more complex
and stressing ballistic missile engagement scenarios. An extensive ground
test program had already conducted successful testing of elements of
the Aegis BMD system. Air defense variants of the Standard Missile are
currently at sea in over 50 Aegis cruisers and destroyers, with more
than 25 additional ships in the production/planned pipeline. 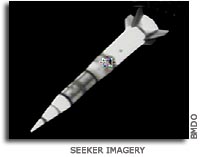 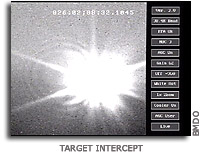 For television media, satellite transmission of the launch video is
scheduled as follows: Between 10:30 p.m. and 12:30 a.m. Thursday, Nov.
21, uplink to Telstar-6 TR-C1, upsouth teleport in Atlanta will turn
Telstar-6 TR-C1 to AMC GE-2 TR-K5.