A Tale of Tails 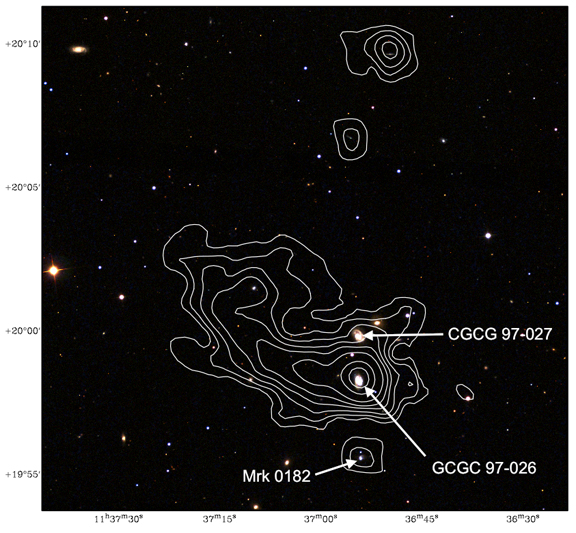 An international group of astronomers led by Tom Scott at the Instituto de Astrofisica de Andalucia in Granada, Spain, has discovered extraordinary long one-sided gaseous tails in two groups of galaxies that are amongst the longest structures ever observed in such environments. They emanate from CGCG 097-026 and FGC 1287, two spiral galaxies in small groups in the outskirts of the galaxy cluster known as Abell 1367 in the constellation of Leo, at a distance of 300 million light-years. The new work, which could lead to a major shift in our understanding of galaxy evolution, is published in the journal Monthly Notices of the Royal Astronomical Society.

Clusters of galaxies are the biggest structures in the Universe that are held together by gravity. They are like a huge metropolis populated by galaxies that interact with one another and with their environment, the hot gas trapped within the cluster’s gravitational field. In the last few decades, astronomers have revealed that, in order to enjoy life in these big cities, galaxies have to pay an entrance fee: they are stripped of their cold hydrogen gas when they enter.

Without this gas, the fuel for future star formation, they age much more quickly than their counterparts who shun the big conurbations. Scientists believe that this is why clusters of galaxies have a significantly larger fraction of passive, quiescent objects where stars are no longer forming than is found in lower density environments. The research by Scott and his team might change this view, showing that galaxies can be robbed of their gas reservoir well before reaching the outskirts of the metropolis.

The astronomers made their discovery after using the Expanded Very Large Array (EVLA) of the National Radio Astronomy Observatory (NRAO) in the USA to study Abell 1367 in detail. “When we looked at the data, we were amazed to see these tail structures,” says Tom Scott.

“The projected lengths of the gaseous tails are 9 to 10 times that of the size of the parent galaxies, i.e., 520,000 and 815,000 light-years respectively. In both cases the amount of cold hydrogen gas in the tails is approximately the same as that remaining in the galaxy’s disk. In other words, these galaxies have already left behind half of their fuel for star formation before entering the sphere of influence of the cluster.”

The commonly accepted scenario invoked to explain the loss of gas in galaxies is based on the idea that when galaxies enter a big cluster, they lose their gas interacting with the hot intra-cluster medium. Like a meteor entering the Earth’s atmosphere, the atomic hydrogen is stripped by the pressure that builds up from moving through the dense, hot gas that pervades the cluster, the stripped gas being dispersed within the intergalactic medium. Scientists call this mechanism ram-pressure stripping.

However, in this case, the perturbed galaxies are still well outside the sphere of influence of this cluster medium and it is not clear which mechanism is responsible for these unique gas tails.

“We considered the various physical processes proposed by theorists in the past to describe gas removal from galaxies, but no one seems to be able to explain our observations,” says Luca Cortese, researcher at ESO-Garching, Germany, and co-author of this work. “Whereas in the case of CGCG 97-026, the gravitational interaction between the various members of the group could explain what we see, FGC 1287 is completely different from any case we have seen before.”

Indeed, ram pressure stripping does not seem to be a viable explanation in this case. As this galaxy is located in the outskirts of the cluster, it lies beyond what is thought to be the sphere of influence of the hot and diffuse gas in Abell 1367. To make things even more complicated, gravitational interactions are apparently unable to explain the extraordinary length of the tail and the lack of any sign of disturbance in the stellar body of the galaxy.

The origin of these extraordinary tails still remains a puzzle for scientists, and they perhaps require some physical mechanism that has not been considered before.

“Although the mechanism responsible for this extraordinary gas tail remains to be determined, our discovery highlights how much there still is to learn about environmental effects in galaxy groups” says team member Elias Brinks, a scientist at the University of Hertfordshire. “This discovery might open a new chapter in our understanding of environmental effects on galaxy evolution.”

A visible light image of the RSCG 42 group of galaxies (CGCG 097-026, CGCG 097-027 and Mrk 0182) in Abell 1367. This is based on a composite of images taken from the Sloan Digital Sky Survey through three color filters. The white contours show the neutral hydrogen distribution, with the highest contour coinciding with the spiral galaxy GCGC 97-026 and a huge gas tail emanating from this galaxy in a north-easterly direction. Four other galaxies in the RSCG 42 group have associated neutral hydrogen here marked by contour lines.

A visible light image of the FGC 1287 group of galaxies in Abell 1367. This is based on a composite of images taken from the Sloan Digital Sky Survey through three color filters. The white contours show the neutral hydrogen distribution. The huge gas tail emanates from the edge on spiral galaxy FGC 1287. Two other members of the group have associated neutral hydrogen here marked by contour lines.

Image showing a wide angle view of Abell 1367 and the positions of the RSCG 42 and FGC 1287 groups. The cyan contours trace the X-ray emission from the hot intra-cluster gas at the centre of the cluster and the white contours show the cold neutral hydrogen gas detected in the two groups.

The new research appears in “Two long tails in the outskirts of Abell 1367”, Scott T., Cortese L., Brinks E., Bravo-Alfaro H., Auld R. and Minchin R., Monthly Notices of the Royal Astronomical Society, in press. A preprint of the paper can be seen at http://arxiv.org/abs/1111.7144

The National Radio Astronomy Observatory is a facility of the National Science Foundation operated under cooperative agreement by Associated Universities, Inc.

The Royal Astronomical Society (RAS, http://www.ras.org.uk), founded in 1820, encourages and promotes the study of astronomy, solar-system science, geophysics and closely related branches of science. The RAS organizes scientific meetings, publishes international research and review journals, recognizes outstanding achievements by the award of medals and prizes, maintains an extensive library, supports education through grants and outreach activities and represents U.K. astronomy nationally and internationally. Its more than 3500 members (Fellows), a third based overseas, include scientific researchers in universities, observatories and laboratories as well as historians of astronomy and others.

** Science contacts are listed below. **