By SpaceRef Editor
April 6, 2016
Filed under Astrophysics, Extrasolar, University of Notre Dame, US 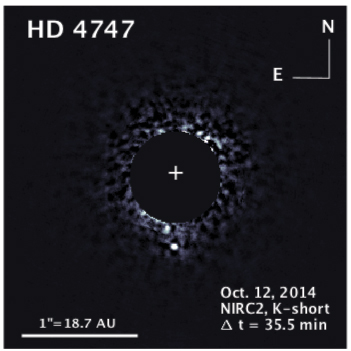 A team led by Justin Crepp has discovered HD 4747 B, a rare brown dwarf. As a new mass, age and metallicity benchmark, HD 4747 B will serve as a laboratory for precision astrophysics to test theoretical models. Image provided by Crepp.

A team led by Justin Crepp, the Frank M. Freimann Assistant Professor of Physics at the University of Notre Dame, has discovered a rare brown dwarf, a faint object with properties in between that of a star and planet. In addition to taking its picture for the first time, Crepp’s team also determined the brown dwarf’s mass, age and composition — essential information that can be used to “benchmark” the study of these elusive objects.

Brown dwarfs are objects thought to have initially begun the process of forming a star but were somehow interrupted before they accumulated sufficient mass and core pressure to ignite nuclear fusion — the process by which the Sun ultimately releases energy in the form of light. An important developmental bridge between bona fide stars and exoplanets, brown dwarfs are very difficult to study because their faint glow fades with time due to a lack of sustained nuclear reactions. The discovery of the object, which goes by the name HD 4747 B, was facilitated by 18 years of precise spectral measurements of the star that indicated it hosts an orbiting companion.

“We suspect that these companions form at the same time and from the same material,” Crepp said. “As such, you can infer physical properties of the brown dwarf from its parent star, like age and composition. There are no other objects for which we know the mass, age and the metallicity simultaneously and also independent of the light that the companion gives off. We can therefore use HD 4747 B as a test-bed to study brown dwarfs, enabling precision astrophysics studies for a directly imaged substellar object.”

In the past, brown dwarf masses have been estimated using theoretical evolutionary models. Crepp’s team instead calculated the mass of HD 4747 B directly using observations of its orbit in an attempt to help refine brown dwarf models. It is expected that this work will in turn help to inform models for extrasolar planets. Based on a three-dimensional orbit analysis, HD 4747 B has a mass of about 60 Jupiters (a mass of 80 Jupiters is required to ignite nuclear fusion), well below the theoretical estimate of 72 Jupiters, although still within uncertainties. Forthcoming measurements acquired by Crepp’s team will provide yet more stringent tests of the models used by astronomers for brown dwarfs.

“This field is transitioning from ‘Hey, I found something neat’ to ‘Hey, I know the mass to within a few percent.’ Now, we can test theoretical models,” Crepp said.

The team detected the object using the Keck telescopes in Hawaii, and published their results in a paper describing the discovery.

Reference:
“The TRENDS High-Contrast Imaging Survey. VI. Discovery of a Mass, Age, and Metallicity Benchmark Brown Dwarf,” Justin R. Crepp et al., 2016, submitted to the Astrophysical Journal [http://apj.aas.org, preprint: http://arxiv.org/abs/1604.00398]. Co-authors include Erica Gonzales and Eric Bechter, both in the Department of Physics at the University of Notre Dame; Benjamin Montet at the Harvard-Smithsonian Center for Astrophysics and the California Institute of Technology; John Asher Johnson at the Harvard-Smithsonian Center for Astrophysics; Danielle Piskorz at the Division of Geological and Planetary Sciences at the California Institute of Technology; Andrew Howard at the Institute for Astronomy at the University of Hawaii; and Howard Isaacson at the University of California Berkeley.