By SpaceRef Editor
September 15, 2017
Filed under Astrobiology, One Earth Message Project, US 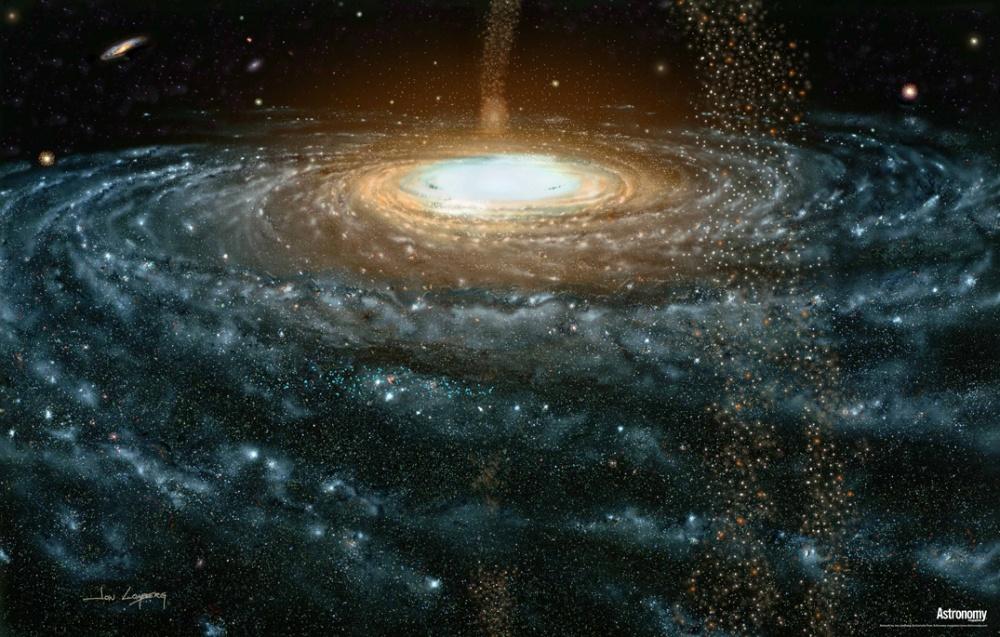 The One Earth Message Project announces that, in cooperation with ASTRONOMY Magazine, we are offering a new poster of a famous work of space art: a revised version of Jon Lomberg’s classic Portrait of the Milky Way mural commissioned by the National Air and Space Museum of the Smithsonian Institution. Since its creation in 1992, this has been considered one of the most accurate depictions of the Milky Way Galaxy ever made—and now there is an updated version, offered to benefit the One Earth Message Kickstarter campaign.

The artist has revised this painting to incorporate scientific discoveries made since its original creation in 1992. These include exoplanets discovered by the Kepler telescope, the Sagittarius Dwarf galaxy, and a new geometry for the Orion Arm.

This 39” x 25” glossy reproduction comes with a finder’s guide to help identify the many real clusters, nebulae, and other objects included in the painting.

The One Earth Message is offered a limited number of posters as premiums for donations to the campaign, including copies with an original signature of the artist.

The One Earth Message Project is attempting to create a digital message for NASA’s New Horizons spacecraft, now far beyond Pluto and leaving the solar system. Like Voyager’s famous Golden Record, it is intended to be recognized, deciphered, and understood by alien intelligences who find the spacecraft in the distant future. The Kickstarter campaign is to fund the creation of the submission website and process to make the message.

One Earth Message Project Director Jon Lomberg was Carl Sagan’s Emmy Award winning Chief Artist on COSMOS, animation designer for the film CONTACT, Nuclear Winter, and many other Sagan projects. He was Design Director for the Voyager Golden Record, working under Frank Drake, with whom he designed a portrait of Earth in photos and diagrams. Lomberg was also Project Director for the Planetary Society’s Visions of Mars DVD, now on Mars aboard Phoenix; and co-designer of the Mars sundials carried aboard three NASA Mars rovers. His work is displayed at the Library of Congress and the National Air and Space Museum.