A Look into Vesta’s Interior 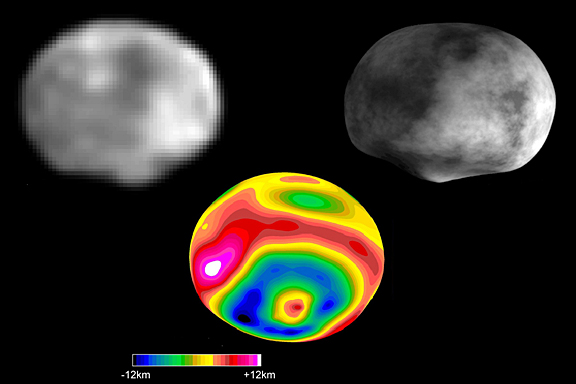 Researchers from the University of North Dakota and from the Max Planck Institute for Solar System Research in Germany have discovered a new kind of asteroid using NASA’s Infrared Telescope Facility on Mauna Kea, Hawaii. The mineralogical composition of 1999 TA10 suggests that unlike many other asteroids it did not originate from the outer rocky crust of its parent asteroid Vesta, but from deeper layers. Until now, no asteroid with this composition was known. With the help of this new discovery it is now possible to determine the thickness of Vesta’s crust and study its internal structure. This summer Vesta will be the first destination of NASA’s mission DAWN. In addition, the body with a diameter of approximately 525 kilometers is believed to be the only remaining protoplanet from the early phase of our solar system.

The asteroid Vesta is unique: Unlike all other minor planets that orbit the Sun within the main belt between the orbits of Mars and Jupiter, Vesta has a differentiated inner structure: A crust of cooled lava covers a rocky mantle and a core made of iron and nickel — quite similar to the terrestrial planets Mercury, Venus, Earth, and Mars. Scientists therefore believe this onion-like built asteroid to be a protoplanet, a relict from an early phase of planet formation more than four and half billion years ago. All other protoplanets either accumulated to form planets or broke apart due to violent collisions.

Vesta seems to have witnessed a huge impact, as can be seen from a large crater on its southern hemisphere. The so-called Vestoids — a group of asteroids with a composition similar to that of Vesta — were most probably created due to this impact. Since some meteorites that were found on Earth consist of similar rock as does Vesta’s mantle, scientists believe that this collision also hurled material from deep within the asteroid into space. But till now there was no source in the form of near-Earth Vestoids for these meteorites with Vesta’s mantle composition.

Near-Earth asteroid 1999 AT10 fills this gap. Using the NASA IRTF, the scientists were now able to analyze the infrared radiation that 1999 AT10 reflected into space and compared its characteristic spectral fingerprints with those of Vesta. Apart from calcium-rich wollastonite, the measurements mainly point to iron-rich ferrosillite. ”These materials can be found in Vesta’s mantle and crust,” explains Dr. Andreas Nathues from MPS. ”However, the ratio is decisive.” In the case of 1999 AT10 the concentration of iron is clearly lower than in any known Vestoids. “This all points to 1999 TA10 having originated from the interior of Vesta,” says Nathues.

The newly discovered body now allows important inferences about its parent asteroid. Models of Vesta’s surface based on observations made by the Hubble Space Telescope render a depth of the South Pole crater of ~25 kilometers at the most. The new discovery now suggests that this would be the maximum possible thickness of the outer crust.

In order to reconstruct the processes that led to the formation of planets more than 4.5 billion years ago, scientists need to determine the thickness of Vesta’s layers as precisely as possible. Only this makes it possible to calculate from which material mixture the protoplanet was made — and thus which materials were present when the solar system formed and in what ratio.

The scientists now hope for more information about Vesta’s structure from NASA’s mission Dawn. In August 2011 the probe, which has been traveling through space since 2007, will rendezvous with Vesta and orbit the asteroid for a year. On board Dawn there are two cameras that were designed and built under the leadership of the Max Planck Institute for Solar System Research in cooperation with the German Space Agency (DLR) and the Institut fuer Datentechnik und Kommunikationsnetze of the Technical University of Braunschweig.