CLEVELAND — Images from the moon will be sent to Earth with higher power and increased efficiency due to communications hardware provided by NASA’s Glenn Research Center.

The hardware, called the traveling wave tube amplifier, was built by L-3 Communications Electron Technologies, Torrance, Calif., under Glenn’s supervision. Incorporated in NASA’s Lunar Reconnaissance Orbiter, or LRO, it is a critical part of the primary communication system that will send data from the spacecraft to Earth as it circles the moon.

LRO is one of NASA’s first lunar endeavors and is set to launch from Cape Canaveral Air Force Station, Fla., on June 18. While orbiting the moon, it will locate safe landing sites, identify potential resources and study how the lunar environment will affect humans. The mission’s goal is a comprehensive atlas of the moon’s features and resources needed for potentially longer stays on the moon. 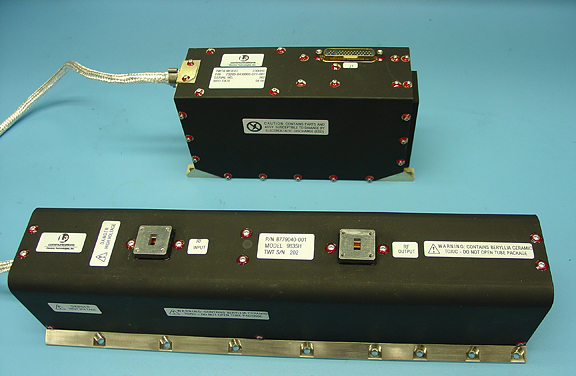 A traveling wave tube is an electronics device that is used to amplify microwave communications signals. It is needed for high frequency and high power applications such as deep space communications because of its higher power capability and efficiency than solid-state devices.

This new amplifier will allow science data and video to be sent from the moon and other deep space destinations at much higher rates and at reduced cost than was previously possible.

This amplifier uses a new waveguide for input and output, resulting in a thicker and larger quartz window for the seals inside the amplifier. Consequently, this additional strength to withstand mechanical shock and vibrations allows for enhanced reliability for travel in the harsh environment of space.

In addition, the amplifier can be used to increase the rate of data transfer from Earth-orbiting satellites to improve our lives here on Earth in such areas as weather forecasting, climate change and Earth observation. Possible future applications for the amplifier include air traffic control of transoceanic flights and tracking ships at sea.

For more information about the Lunar Reconnaissance Orbiter, visit: