A Day in the Lives of Galaxies

Like a photographer clicking random snapshots of a crowd of people, NASA’s Hubble Space Telescope has taken a view of an eclectic mix of galaxies. In taking this picture, Hubble’s Advanced Camera for Surveys was not looking at any particular target. The camera was taking a picture of a typical patch of sky, while Hubble’s infrared camera was viewing a target in an adjacent galaxy-rich
region.

The jumble of galaxies in this image, taken in September 2003, includes a yellow spiral whose arms have been stretched by a possible collision [lower right]; a young, blue galaxy [top] bursting with star birth; and several smaller, red galaxies. 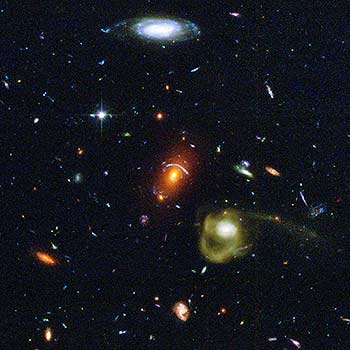 But the most peculiar-looking galaxy of the bunch — the dramatic blue arc in the center of the photo — is actually an optical illusion. The blue arc is an image of a distant galaxy that has been smeared into the odd shape by a
phenomenon called gravitational lensing. This “funhouse-mirror effect” occurs when light from a distant object is bent and stretched by the mass of an intervening object.

In this case the gravitational lens, or intervening object, is a red elliptical galaxy nearly 6 billion light-years from Earth. The red color suggests that the galaxy contains older, cooler stars.

The distant object whose image is smeared into the long blue arc is about 10 billion light-years away. This ancient galaxy existed just a few billion years after the Big Bang, when the universe was about a quarter of its present age.
The blue color indicates that the galaxy contains hot, young stars.

Gravitational lenses can be seen throughout the sky because the cosmos is crowded with galaxies. Light from distant galaxies, therefore, cannot always travel through space without another galaxy getting in the way. It is like
walking through a crowded airport. In space, a faraway galaxy’s light will travel through a galaxy that is in the way. But if the galaxy is massive enough, its gravity will bend and distort the light.

Long arcs, such as the one in this image, are commonly seen in large clusters of galaxies because of their huge concentrations of mass. But they are not as common in isolated galaxies such as this one. For the gravitational lens to occur, the galaxies must be almost perfectly aligned with each other.

Gravitational lenses yield important information about galaxies. They are a unique and extremely useful way of directly determining the amount of mass, including dark matter, in a galaxy. Galaxies are not just made up of stars,
gas, and dust. An invisible form of matter, called dark matter, makes up most of a galaxy’s mass. A study of this newly discovered system, dubbed J033238-275653, was published in the Astrophysical Journal Letters. This study, together
with similar observations, may allow astronomers to make the first direct measurements of the masses of bright, nearby galaxies.

Electronic images and additional information are available at:
http://hubblesite.org/news/2004/21

The Space Telescope Science Institute (STScI) is operated by the Association of Universities for Research in Astronomy, Inc. (AURA), for NASA, under contract with the Goddard Space Flight Center, Greenbelt, MD. The Hubble Space Telescope is a project of international cooperation between NASA and the European Space
Agency (ESA).