A Blue Whirlpool in The River: Tranquil galaxy home to violent events 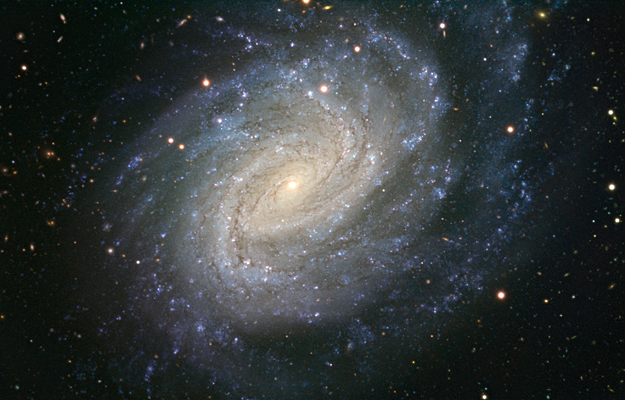 A new image taken with ESO’s Very Large Telescope shows the galaxy NGC 1187. This impressive spiral lies about 60 million light-years away in the constellation of Eridanus (The River). NGC 1187 has hosted two supernova explosions during the last thirty years, the latest one in 2007. This picture of the galaxy is the most detailed ever taken.

The galaxy NGC 1187 [1] is seen almost face-on, which gives us a good view of its spiral structure. About half a dozen prominent spiral arms can be seen, each containing large amounts of gas and dust. The bluish features in the spiral arms indicate the presence of young stars born out of clouds of interstellar gas.

Looking towards the central regions, we see the bulge of the galaxy glowing yellow. This part of the galaxy is mostly made up of old stars, gas and dust. In the case of NGC 1187, rather than a round bulge, there is a subtle central bar structure. Such bar features are thought to act as mechanisms that channel gas from the spiral arms to the centre, enhancing star formation there.

Around the outside of the galaxy many much fainter and more distant galaxies can also be seen. Some even shine right through the disc of NGC 1187 itself. Their mostly reddish hues contrast with the pale blue star clusters of the much closer object.

NGC 1187 looks tranquil and unchanging, but it has hosted two supernovae explosions since 1982. A supernova is a violent stellar explosion, resulting from the death of either a massive star or a white dwarf in a binary system [2]. Supernovae are amongst the most energetic events in the Universe and are so bright that they often briefly outshine an entire galaxy before fading from view over several weeks or months. During this short period a supernova can radiate as much energy as the Sun is expected to emit over its entire life span.

In October 1982, the first supernova seen in NGC 1187 — SN 1982R [3] was discovered at ESO’s La Silla Observatory and more recently, in 2007, the amateur astronomer Berto Monard in South Africa spotted another supernova in this galaxy — SN 2007Y. A team of astronomers subsequently performed a detailed study and monitored SN 2007Y for about a year using many different telescopes [4]. This new image of NGC 1187 was created from observations taken as part of this study and the supernova can be seen, long after the time of maximum brightness, near the bottom of the image.

These data were acquired using the FORS1 instrument attached to the ESO’s Very Large Telescope at the Paranal Observatory in Chile. Notes

[1] This galaxy was discovered in England by William Herschel in 1784.

[3] The International Astronomical Union is responsible for naming supernovae after they are discovered. The name is formed by the year of discovery, followed by a one or two letter designation. The first 26 supernovae of the year get an upper case letter from A to Z. Subsequent supernovae are designated with two lower-case letters.

[4] Further information about SN 2007Y is available in a paper by Stritzinger et al. More information

The year 2012 marks the 50th anniversary of the founding of the European Southern Observatory (ESO). ESO is the foremost intergovernmental astronomy organisation in Europe and the world’s most productive astronomical observatory. It is supported by 15 countries: Austria, Belgium, Brazil, the Czech Republic, Denmark, France, Finland, Germany, Italy, the Netherlands, Portugal, Spain, Sweden, Switzerland and the United Kingdom. ESO carries out an ambitious programme focused on the design, construction and operation of powerful ground-based observing facilities enabling astronomers to make important scientific discoveries. ESO also plays a leading role in promoting and organising cooperation in astronomical research. ESO operates three unique world-class observing sites in Chile: La Silla, Paranal and Chajnantor. At Paranal, ESO operates the Very Large Telescope, the world’s most advanced visible-light astronomical observatory and two survey telescopes. VISTA works in the infrared and is the world’s largest survey telescope and the VLT Survey Telescope is the largest telescope designed to exclusively survey the skies in visible light. ESO is the European partner of a revolutionary astronomical telescope ALMA, the largest astronomical project in existence. ESO is currently planning a 40-metre-class European Extremely Large optical/near-infrared Telescope, the E-ELT, which will become “the world’s biggest eye on the sky”.