By SpaceRef Editor
February 26, 2001
Filed under Johnson Space Center, US

The editors of Precambrian Research and the team that startled the scientific world in August 1996 with evidence they had found in a Martian meteorite indicating that life once existed on Mars now announce
publication of a followup paper [Gibson et al., Precambrian Research 106:15-34 (2001)]. In the 4 years since the publication of that controversial paper [McKay et al., Science 273:924–930], an enormous number of studies have been undertaken to refute or corroborate the hypothesis.

The paper being published in Precambrian Research this month offers new observations of two additional Martian meteorites, evaluates subsequent studies for and against the original lines of evidence, measures evidence for past life on Mars against established criteria for accepting terrestrial samples as fossils, and considers the problem of terrestrial contamination of martian samples-a problem that must be solved before samples are brought from Mars to Earth in 2014. Everett Gibson, senior author of the paper noted, “If the features observed in the two younger Martian meteorites are confirmed to have a biogenic origin, life may have existed on Mars from 3.9 billion years ago to as recently as 165-175 million years ago.”

“Life on Mars: evaluation of the evidence within Martian meteorites ALH84001, Nakhla, and Shergotty” is the title of the new paper. The authors of this work, which was funded by NASA’s Exobiology Program and Astrobiology Institute, are Everett K. Gibson, Jr., and David S. McKay of NASA’s Johnson Space Center; Kathie L. Thomas-Keprta, Susan J. Wentworth, and Mary Sue Bell of Lockheed
Martin at JSC; Frances Westall, a National Research Council Fellow at the Lunar & Planetary Institute in Houston; Andrew Steele and Jan Toporski of the University of Portsmouth, England; and Christopher S. Romanek of the Savannah River Ecology Laboratory. Of these, Gibson, McKay, Thomas-Keprta, and Romanek were authors of the original paper on the subject.

The status of the four lines of evidence for life on Mars is summarized as follows. 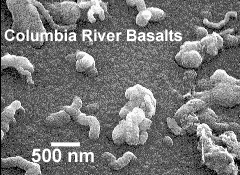 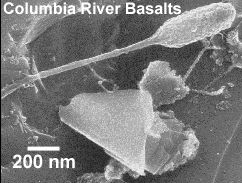 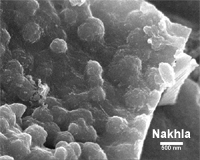 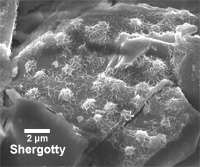 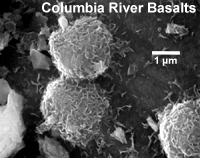 Figure 2. Closeup [field emission scanning electron microscope (FE-SEM)] of a triplet structure within the martian meteorite Nakhla with a 20 nanometer wide filament extending from the apex of a terminal sphere. The spheres appear to be partially submerged within biofilm or a later generation of "iddingsite" clay.