Astronomers from the Sloan Digital Sky Survey (SDSS)
have made the most precise measurement to date of the cosmic clustering of
galaxies and dark matter, refining our understanding of the structure and
evolution of the Universe.

“From the outset of the project in the late 80’s, one of our key goals has
been a precision measurement of how galaxies cluster under the influence of
gravity”, explained Richard Kron, SDSS’s director and a professor at The
University of Chicago.

SDSS Project spokesperson Michael Strauss from Princeton University and one
of the lead authors on the new study elaborated that: “This clustering pattern
encodes information about both invisible matter pulling on the galaxies and
about the seed fluctuations that emerged from the Big Bang.”

The findings are described in two papers submitted to the Astrophysical
Journal and to the Physical Review D; they can be found on the physics
preprint Web site, www.arXiv.org, on October 28. 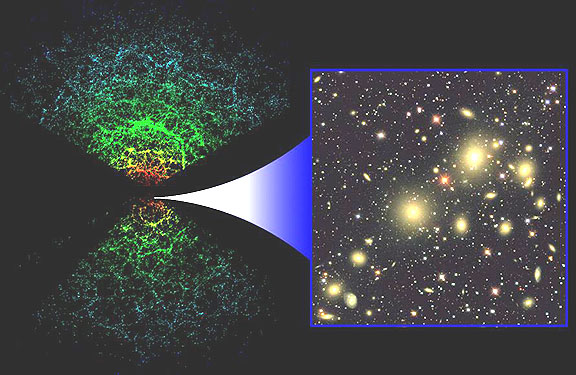 The leading cosmological model invokes a rapid expansion of space known as
inflation that stretched microscopic quantum fluctuations in the fiery
aftermath of the Big Bang to enormous scales. After inflation ended, gravity
caused these seed fluctuations to grow into the galaxies and the galaxy
clustering patterns observed in the SDSS.

Images of these seed fluctuations were released from the Wilkinson Microwave
Anisotropy Probe (WMAP) in February, which measured the fluctuations in the
relic radiation from the early Universe.

“We have made the best three-dimensional map of the Universe to date, mapping
over 200,000 galaxies up to two billion light years away over six percent of
the sky”, said another lead author of the study, Michael Blanton from New York
University. The gravitational clustering patterns in this map reveal the
makeup of the Universe from its gravitational effects and, by combining their
measurements with that from WMAP, the SDSS team measured the cosmic matter to
consist of 70 percent dark energy, 25 percent dark matter and five percent
ordinary matter.

They found that neutrinos couldn’t be a major constituent of the dark matter,
putting the strongest constraints to date on their mass. Finally, the SDSS
research found that the data are consistent with the detailed predictions of
the inflation model.

These numbers provide a powerful confirmation of those reported by the WMAP
team. The inclusion of the new SDSS findings helps to improve measurement
accuracy, more than halving the uncertainties from WMAP on the cosmic matter
density and on the Hubble parameter (the cosmic expansion rate). Moreover,
the new measurements agree well with the previous state-of-the-art results
that combined WMAP with the Anglo-Australian 2dF galaxy redshift survey.

“Different galaxies, different instruments, different people and different
analysis – but the results agree”, says Max Tegmark from the University of
Pennsylvania, first author on the two papers. “Extraordinary claims require
extraordinary evidence”, Tegmark says, “but we now have extraordinary
evidence for dark matter and dark energy and have to take them seriously no
matter how disturbing they seem.”

“The real challenge is now to figure what these mysterious substances
actually are”, said another author, David Weinberg from Ohio State University.

The SDSS is the most ambitious astronomical survey ever undertaken, with more
than 200 astronomers at 13 institutions around the world.

“The SDSS is really two surveys in one”, explained Project Scientist James
Gunn of Princeton University. On the most pristine nights, the SDSS uses a
wide-field CCD camera (built by Gunn and his team at Princeton University and
Maki Sekiguchi of the Japan Participation Group) to take pictures of the
night sky in five broad wavebands with the goal of determining the position
and absolute brightness of more than 100 million celestial objects in
one-quarter of the entire sky. When completed, the camera was the largest
ever built for astronomical purposes, gathering data at the rate of 37
gigabytes per hour.

On nights with moonshine or mild cloud cover, the imaging camera is replaced
with a pair of spectrographs (built by Alan Uomoto and his team at The Johns
Hopkins University). They use optical fibers to obtain spectra (and thus
redhsifts) of 608 objects at a time. Unlike traditional telescopes in which
nights are parceled out among many astronomers carrying out a range of
scientific programs, the special-purpose 2.5m SDSS telescope at Apache Point
Observatory in New Mexico is devoted solely to this survey, to operate
every clear night for five years. 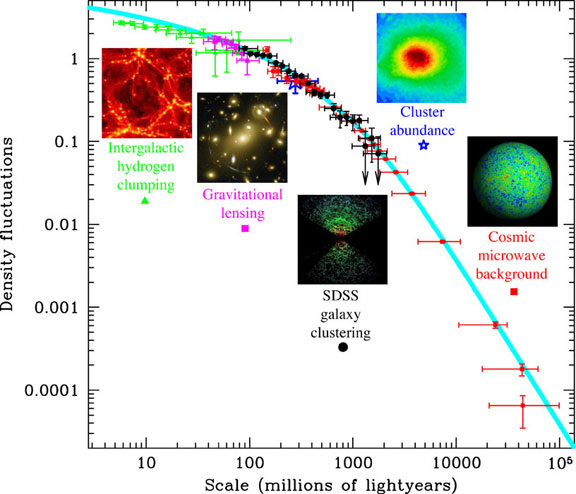 The first public data release from the SDSS, called DR1, contained about 15
million galaxies, with redshift distance measurements for more than 100,000 of
them. All measurements used in the findings reported here would be part of the
second data release, DR2, which will be made available to the astronomical
community in early 2004.

Strauss said the SDSS is approaching the halfway point in its goal of
measuring one million galaxy and quasar redshifts.

“The real excitement here is that disparate lines of evidence from the cosmic
microwave background (CMB), large-scale structure and other cosmological
observations are all giving us a consistent picture of a Universe dominated by
dark energy and dark matter”, said Kevork Abazajian of the Fermi National
Accelerator Laboratory and the Los Alamos National Laboratory.

(A complete list of authors and institutions can be found at www.sdss.org)

ABOUT THE SLOAN DIGITAL SKY SURVEY

Funding for the project has been provided by the Alfred P. Sloan Foundation,
the Participating Institutions, the National Aeronautics and Space
Administration, the National Science Foundation, the U.S. Department of
Energy, the Japanese Monbukagakusho, and the Max Planck Society.