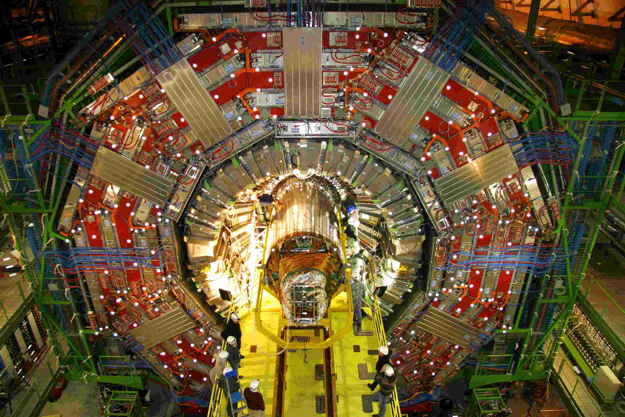 Based on the data produced by big detectors like CMS at CERN, Geneva, the structure of matter can be studied in detail. (Photo: KIT/Markus Breig)

How many matter particles exist in nature? Particle physicists have been dealing with this question for a long time. The 12 matter particles contained in the standard model of particle physics? Or are there further particles with too high a mass to be produced by the experiments performed so far? These questions are now answered by researchers of KIT, CERN, and Humboldt University in the current issue of the Physical Review Letters. (DOI: 10.1103/PhysRevLett.109.241802)

Matter particles, also called fermions, are the elementary components of the universe. They make up everything we see on earth or through telescopes. “For a long time, however, it was not clear whether we know all components,” explains Ulrich Nierste, Professor at KIT. The standard model of particle physics knows 12 fermions. Based on their similar properties, they are divided into three generations of four particles each. Only the first generation of particles occurs in appreciable amount outside of particle accelerators. Among these particles are the electron, the electron neutrino, and the up-quark and down-quark. Up- and down-quarks form heavier particles, such as protons and neutrons and, hence, all elements of the periodic system.

“But why does nature have second and third generations, if these are hardly needed? And are there maybe more generations of particles?”, ask the main authors of the article, Martin Wiebusch and Otto Eberhardt. At least, the latter question is answered: “There are exactly three fermion generations in the standard model of particle physics!”

For their analysis, the researchers combined latest data collected by the particle accelerators LHC and Tevatron with many known measurements results relating to particles, such as the Z-boson or the top-quark. The result of the statistical analysis is that the existence of further fermions can be excluded with a probability of 99.99999 percent (5.3 sigma). The most important data used for this analysis come from the recently discovered Higgs particle.

The Higgs particle gives all other particles their mass. As additional fermions were not detected directly in accelerator experiments, they have to be heavier than the fermions known so far. Hence, these fermions would also interact with the Higgs particle more strongly. This interaction would have modified the properties of the Higgs particle such that this particle would not have been detected. With the exclusion of the fourth fermion generation the first open question of particle physics is now answered by the measurements made at the new LHC particle accelerator ring of CERN.

“Within the standard model the number of fermions is now firmly established,” explains Nierste. However, some interesting questions remain. The properties of the just discovered Higgs particle still have to be determined and it has to be found out why there is more matter than antimatter in the universe.

Karlsruhe Institute of Technology (KIT) is a public corporation according to the legislation of the state of Baden-Wuerttemberg. It fulfills the mission of a university and the mission of a national research center of the Helmholtz Association. KIT focuses on a knowledge triangle that links the tasks of research, teaching, and innovation.