The X-37B Orbital Test Vehicle mission 4 (OTV-4), the Air Force’s unmanned, reusable space plane, landed at NASA’s Kennedy Space Center Shuttle Landing Facility May 7, 2017.
“Today marks an incredibly exciting day for the 45th Space Wing as we continue to break barriers,” said Brig. Gen. Wayne Monteith, the 45th SW commander. “Our team has been preparing for this event for several years, and I am extremely proud to see our hard work and dedication culminate in today’s safe and successful landing of the X-37B.”

The OTV-4 conducted on-orbit experiments for 718 days during its mission, extending the total number of days spent on-orbit for the OTV program to 2,085 days. 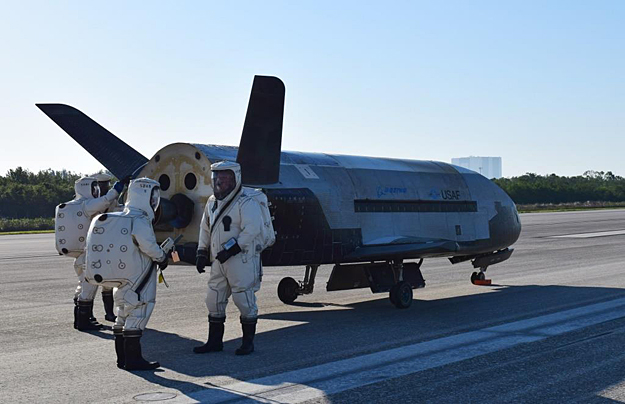 “The landing of OTV-4 marks another success for the X-37B program and the nation,” said Lt. Col. Ron Fehlen, X-37B program manager. “This mission once again set an on-orbit endurance record and marks the vehicle’s first landing in the state of Florida. We are incredibly pleased with the performance of the space vehicle and are excited about the data gathered to support the scientific and space communities. We are extremely proud of the dedication and hard work by the entire team.”

The X-37B is the newest and most advanced re-entry spacecraft. Managed by the Air Force Rapid Capabilities Office, the X-37B program performs risk reduction, experimentation and concept of operations development for reusable space vehicle technologies.

The #X37B #OTV4 is the newest and most advanced re-entry spacecraft. Find out more about today's landing here: https://t.co/GUGgOMQiYg pic.twitter.com/HfHHVnWhYc

“The hard work of the X-37B OTV team and the 45th Space Wing successfully demonstrated the flexibility and resolve necessary to continue the nation’s advancement in space,” said Randy Walden, the director of the Air Force Rapid Capabilities Office. “The ability to land, refurbish, and launch from the same location further enhances the OTV’s ability to rapidly integrate and qualify new space technologies.”

The Air Force is preparing to launch the fifth X-37B mission from Cape Canaveral Air Force Station, Florida, later in 2017.