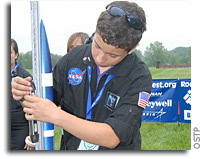 Chirag Parikh & Phil Larson: Earlier this month, we were honored to be invited to the Team America Rocketry Challenge held about 50 miles outside Washington, DC. There, hundreds of middle- and high-school students were participating in a model rocketry competition sponsored by the Aerospace Industries Association.

As two guys with aerospace in our blood, we know firsthand the excitement and adrenaline rush of launching model rockets. For many youngsters–us among them–model rocketry is a rite of passage that springboards early dreamers to become the engineers and aerospace professionals of tomorrow. They will be the ones designing, building, and operating the next-generation rockets that launch astronauts into space, probes into the farthest reaches of our solar system, and Earth-orbiting satellites that touch every facet of our daily lives.

Competitions like the one we attended this month help embed in students the qualities necessary to succeed, such as creative thinking, problem solving, and teamwork. Each three- to 10-person team was challenged to design and build a rocket to climb exactly 750 feet during a 40- to 45-second flight. The payload, a raw egg, had to return to the ground by parachute undamaged.