On 24 April 2015 a 7.9 magnitude earthquake struck Nepal – a nation woefully unprepared to respond to such an event. Nearly 300 aftershocks of magnitude 4.0 or greater have rattled the country for the past month.
One especially large aftershock of magnitude 7.4 on 12 May caused the already-shattered infrastructure to collapse further. Nepal needed help – help that did not rely upon a non-functional infrastructure. Much of the help was traditional. But some of that help arrived in the form of assets in space and space-derived assets on the ground.

One piece of NASA-developed hardware utilized in Nepal was able to detect human heartbeat amidst huge piles of rubble. And it saved lives. Other machines orbited overhead in space analyzing the earthquake itself and how Nepal changed as a result. Both technologies shared similar technology.

Within hours of the quake, help began to arrive in Nepal from around the world. Responding to disasters like this with monetary, material, and logistical assistance is something that many countries do almost instantly these days. Even on a calm day travel into and around Kathmandu can be complicated with infrastructure in disrepair or simply incapable of meeting the demands placed upon it. I spent 6 weeks in Nepal in 2009, so I speak from some personal experience. Throw in an earthquake and much of that infrastructure simply halted – or disappeared. The main airport soon became jammed and planes carrying assistance were not able to land. Downed buildings and a populace scared to remain indoors complicated the ability to move rescue resources to the places were they were needed.

As of the day I am writing this, a month after the initial large quake, the death toll stands over 8,000. As rubble continues to be cleared, that number will inexorably rise but fortunately, this number is somewhat less than was originally predicted. Due to the realities of how a country like Nepal operates the bulk of the rescue efforts were initially focused where they could reach the greatest number of people in the shortest period of time i.e. the Kathmandu Valley. Rural and increasingly remote areas north and east of Kathmandu received less attention. While the situation in the area around Kathmandu is now understood, these remote areas are still somewhat of an unknown quantity weeks after the initial earthquake. 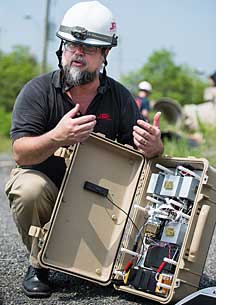 Among the teams responding from the America was the U.S. Army’s “Operation Sahayogi Haat” (“Helping Hand” in Nepali) who worked with personnel from 24 countries. In addition to the Army, rescue personnel from Fairfax County, Virginia, Virginia Task Force 1 Urban Search and Rescue Team and the Los Angeles County Fire Department’s California Task Force 2 Medium Urban Search and Rescue team were also dispatched to Nepal. Both the Virginia and California teams have garnered international fame and respect for their work in disaster areas around the world. The Fairfax County Urban Search and Rescue Team aka Virginia Task Force 1 (from the county in northern Virginia where I live) just arrived home a few days ago, their departure from Nepal having been delayed by the large aftershock.

Fairfax County has been working with NASA Jet Propulsion Laboratory on a portable device that is capable of detecting human heartbeats even if a person is buried under tons of rubble. The hardware is called “FINDER“, (Finding Individuals for Disaster and Emergency Response) and it resulted from a collaborative effort between NASA Jet Propulsion Laboratory (JPL) and the Department of Homeland Security’s Science and Technology Directorate. FINDER is used as part of a larger group of tools: seismometers, microphones, cameras, robots, dogs, etc. Its greatest utility is in determining whether a person is still alive even if there is no other way to see or reach that person – especially if they are unconscious or non-responsive. 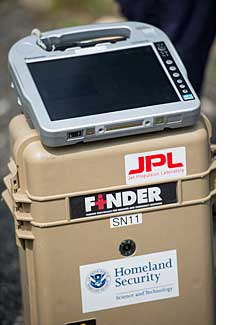 The final prototype of the Finding Individuals for Disaster and Emergency Response (FINDER) – a radar technology designed to detect heartbeats of victims trapped in wreckage is seen here on Thursday, May 7, 2015 at the Virginia Task Force ONE Training Facility in Lorton, VA.(NASA/Aubrey Gemignani) Larger image

The basic technology behind FINDER is a microwave radar system that can detect a human heartbeat as well as their breathing under 30 feet of rubble or through 20 feet of solid concrete. The device is so precise that it can differentiate between a human and animals.

A FINDER unit uses microwave radar to detect exceptionally small motions. To make these observations, the device analyzes signals using algorithms derived from those used to measure the orbits of satellites at Jupiter and Saturn and changes in Earth’s surface seen by satellites.

The FINDER device is built inside standard Pelican case that fits in the overhead luggage rack of a commercial airliner. Weighing less than 20 pounds the FINDER unit is very transportable. The unit can operate for 14 hours on internal batteries and can be recharged using commonly available resources.

FINDER made its way to Nepal quickly. David Lewis from R4 Incorporated, one of two commercial ventures building products based on FINDER was in the region and was able to make his way to Nepal within several days – with two FINDER units. Working with Search and Rescue personnel FINDER located several people in the rubble who were eventually rescued. After several days in Kathmandu Lewis managed to hitch a ride on the back of a motorbike to Chautara, a small town north of Kathmandu. Once again the FINDER unit once again helped locate two people who were subsequently rescued. 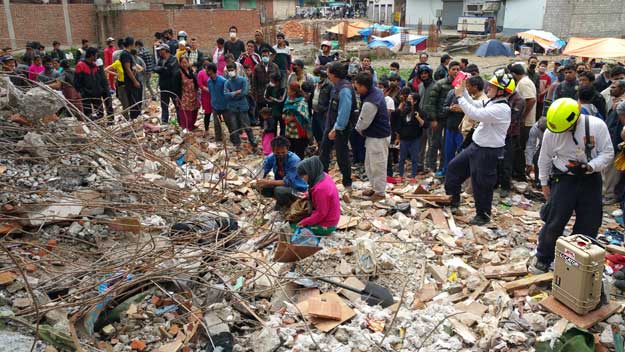 NASA and DHS sponsored a demonstration of FINDER technology at the Virginia Task Force One Training Facility in Lorton, Virginia, on 7 May. Personnel were able to find someone hiding in an unknown location in the rubble at the facility. Several dozen media were in attendance. As best as I can tell, I was the only one covering space technology who was there. Unfortunate. 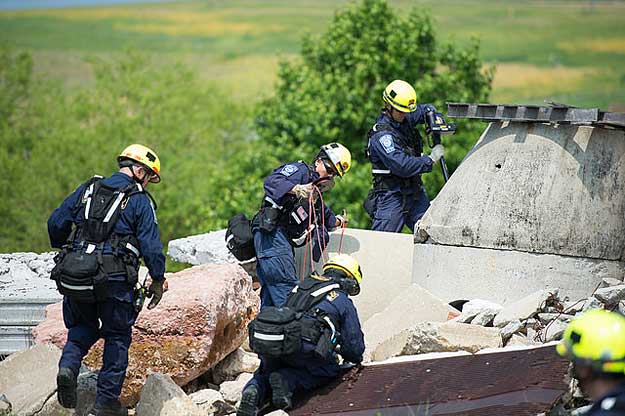 The patent for the technology is held by JPL, part of the California Institute of Technology. Currently, two companies have obtained a license from JPL to manufacture and market hardware. According to James Lux, task manager for the FINDER project at JPL, these licenses are inexpensive since JPL is not especially interested in making money. Rather, JPL is concerned that potential commercial licensees understand the technology, its potential, the process of bringing a product to market, and are aware of the fact that Search and Rescue technology is not an especially large market to begin with. In other words, JPL wants to see the technology used successfully and productively.

Future enhancements of FINDER technology could be used for other search and rescue efforts as well as part of disease outbreak control – possibly using drones and other autonomous robotic systems. Lux mentioned the possibility that additional data handling and communications capabilities could allow some telemedicine functionality.

What would be interesting to see is allowing companies and organizations located within countries like Nepal to obtain licenses from JPL such that they could develop this technology for domestic use. Spinoffs like FINDER need to be proactively spun off from NASA.