Ben Shelef of the SpaceWard Foundation reports that he has secured a date for this years Power Beaming Challenge AKA the Space Elevator Games with up to $2,000,000 in NASA Centennial Challenge prize money at stake now that the previous technical issues have been resolved. Three teams have qualified for the games with a fourth attempting to qualify. It appears that this time around someone will win at least level 2 in prize money. The competition is scheduled for the week of November 2 at NASA’s Dryden Flight Research Center at Edwards Air Force Base near Mojave, California. 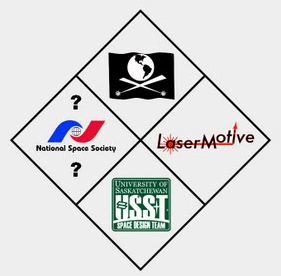 The teams that have qualified so far are: The Kansas City Space Pirates, LaserMotive of Seattle, and the University of Saskatchewan Space Team (USST). The National Space Society entry is trying to qualify their optical system and climber this week and by all accounts are making good progress.

On November 2nd and 3rd the SpaceWard Foundation will set-up, test and calibrate the competition tether with the actual competition to take place starting on Wednesday the 4th.

Each team will get one 45-minute climb window per day and will repeat the process over 3 days to make sure each team can achieve the best score they are capable of.