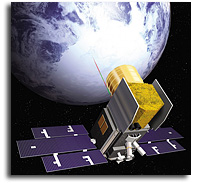 “The hexadecagon-shaped personal satellite, called TubeSat, weighs about 1.65 pounds and is a little larger than a rectangular Kleenex box. TubeSats will be placed in self-decaying orbits 192 miles above the earth’s surface. Once deployed, they can put out enough power to be picked up on the ground by a hand-held amateur radio receiver. After operating for a few months, TubeSat will re-enter the atmosphere and burn up. “It is a pico satellite that can be a very low-cost space-based platform for experimentation or equipment testing,” says Randa Milliron, CEO and founder of Interorbital Systems. About 20 kits have been sold and 14 more are in the process of being handed over to customers, says Milliron.”