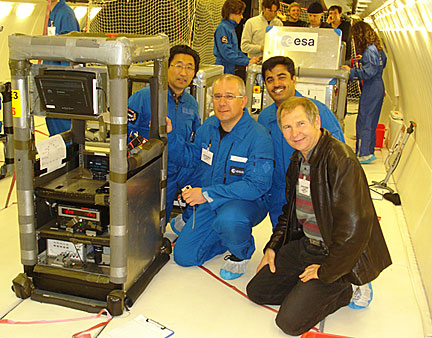 Here on Earth, the process of boiling is used for tasks ranging from cooking and heating to power generation. In space exploration, boiling may also be used for power generation and other applications, but because boiling works differently in a zero-gravity environment, it is difficult to design hardware that will not overheat or cause other problems.
Professor Jungho Kim of the A. James Clark School’s Department of Mechanical Engineering at the University of Maryland, College Park, is working with John McQuillen, project scientist at NASA’s Glenn Research Center in Ohio, to study how boiling is altered in zero-gravity. Their experiment, the Microheater Array Boiling Experiment (MABE), will launch on the Shuttle Discovery on February 24, and be placed aboard the International Space Station for operation in the following few months. The experiment, which has already been tested on NASA’s “Vomit Comet” and the European Space Agency’s Parabolic Flight Campaign in France, will be installed in the Microgravity Science Glovebox once aboard the ISS.

The results of the experiment could help engineers design space hardware that utilizes boiling for multiple applications.

“In space, boiling may be required to generate vapor to power turbines in some advanced concepts for power generation, for temperature control aboard spacecraft, and for water purification,” says Kim.
When a liquid is boiled on Earth, vapor, which is less dense than liquid, is removed from heated surfaces through the action of buoyancy. In zero-gravity, the buoyancy force becomes negligible and vapor can blanket the heated surfaces rather than moving away, potentially leading the surfaces to a state known as critical heat flux.

Critical heat flux occurs when a heater or plate becomes too hot, restricting the flow of liquid to the surface and causing the plate to overheat and potentially burn out. Since liquids boil differently in space, an understanding of how these fluids behave can improve the reliability and expand the applications of space exploration hardware.

The experiment that will take place on the ISS will use two arrays of platinum microheaters bonded to a quartz plate. The arrays measure 7 mm and 2.7 mm across. The heaters are warmed when electricity is applied, and spaces between the heaters lines will allow the boiling process to be visualized through the transparent quartz. Boiling of a refrigerant-like fluid (FC-72) will be filmed at high speed and the video sent back to Earth along with the heater data in real-time for analysis.

“We have calibrated these heaters as a function of a temperature, and we measure the power level required to keep each of the heaters in the array at a constant temperature,” Kim states. “Using a camera that looks through these microheaters, we can examine the relationship between the power level and the state of the fluid above that microheater.”

Back here on Earth, Kim has both graduate and undergraduate students helping him with his research.

NOTE TO EDITORS: Video and high-res images are available with the online version of this press release: http://eng.umd.edu/news/news_story.php?id=5519

About the A. James Clark School of Engineering

The Clark School of Engineering, situated on the rolling, 1,500-acre University of Maryland campus in College Park, Md., is one of the premier engineering schools in the U.S., with graduate and undergraduate education programs ranked in or near the Top 20. In 2010, the Clark School was ranked 13th in the world by the Institute of Higher Education and Center for World-Class Universities in its Academic Ranking of World Universities. Three faculty members affiliated with the Clark School were inducted into the National Academy of Engineering in 2010.

The school, which offers 13 graduate programs and 12 undergraduate programs, including degree and certification programs tailored for working professionals, is home to one of the most vibrant research programs in the country. The Clark School garnered research awards of $171 million in the last year.  With emphasis in key areas such as energy, nanotechnology and materials, bioengineering, robotics, communications and networking, life cycle and reliability engineering, project management, intelligent transportation systems and aerospace, the Clark School is leading the way toward the next generations of engineering advances.