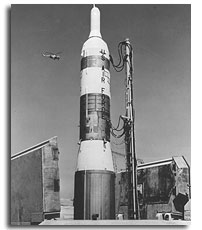 As is the case with any operational weapons system, Titan launch crews were required to stay proficient on the operation of their hardware. And the hardware itself had to periodically checked.

47 years ago, on 27 May 1963, Titan 61-4492 was put through a countdown exercise at Larson AFB for crew training purposes. The rocket was fueled and taken through the standard countdown sequence until a short time before launch would normally occur. In this case, the countdown progressed for 17 minutes.

The following memo (a “U-86 report”) was issued to report the event. 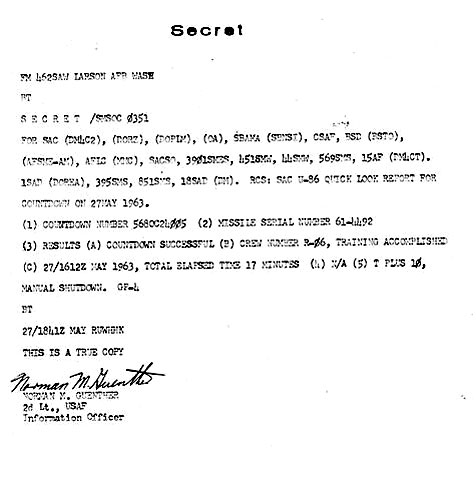 According Fred Epler, a consumate Titan-1 historian: “The U-86 reports were sent to SAC HQ and info copies were sent to other missile units. A report was usually written for 1 day or the countdown of a missile/launcher. There was supposed to be a standard format but I have noticed that it varied from unit to unit. Most Lowry AFB U-86’s were not typed as a paragraph but as a list. The report format went as follows:

I have seen very few that were actually printed using this format.

The copy attached is fairly easy to understand, the date and times are Z-Date/Time. T plus 10 is how far the countdown went,the average was Tplus 7. Most Titan-1 countdowns never got past T-280, at this point there was usually a 5 minute hold programmed but in most cases problems also started at this point, example; launcher failed to raise, a valve in the LOX PLS failed to close. The longest elapsed time I’ve seen for a Titan-1 countdown was 52 minutes. A lot of these U-86’s were generated during Operation Long Reach which was running countdowns on every missile in the unit,excluding those for training, Completion was 2 successful counts back to back on a launcher,once done they moved to the next launcher and so on. R/V’s were removed or replaced with dummies and all pyrotechnics were removed.”