Spaceward Bound Goes to the Deserts of the United Arab Emirates 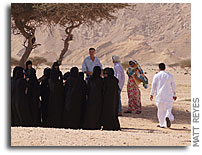 “Whether or not you remember the winter of 2011 as unusually cold or snowy, an adventurous team of experts will remember its intense heat, as they searched for microbial life between sand dunes in the United Arab Emirates (UAE). They were searching for simple life forms that also may exist on other planets. The United States team consisted of teachers Mike Wing and Lucinda Land, NASA space scientists Chris McKay and Jon Rask, and education specialist Matthew Reyes. Together, they embarked on a high adventure desert expedition from Feb. 18 – Mar. 4 with UAE students and teachers as part of a NASA education program, called Spaceward Bound. Developed at NASA’s Ames Research Center, Moffett Field, Calif., Spaceward Bound’s mission is to train the next generation of space explorers. Led by the U.S. team, local students and teachers from the Emirates were given real planetary research experience using remote, extreme environments in the UAE deserts as analogs for Mars and Saturn’s moon, Titan.” More