Those who travel to space are rewarded with a beautiful sight – planet Earth. But the effects of space travel on the human sense of sight aren’t so beautiful.
More than 30 percent of astronauts who returned from two-week space shuttle missions and 60 percent who spent six months aboard the International Space Station were diagnosed with eye problems. Two recent investigations examined mechanisms that may explain eye changes in spaceflight, help find ways to minimize this health risk to astronauts and eventually prevent and treat eye diseases on Earth.

Mice were flown aboard shuttle flights STS-133 in March 2011 and STS-135 in July 2011 as part of the Commercial Biomedical Testing Module-2 (CBTM-2) and CBTM-3 investigations into how space affects muscle and bones. These sets of mice found second life, contributing to other studies through a tissue-sharing program. Two studies used eye tissue from the mice to provide the first direct evidence that spaceflight causes cellular-level damage that has the potential to cause long-term vision problems.

Susana Zanello, Universities Space Research Association scientist at NASA’s Johnson Space Center in Houston, examined eye tissue for changes in gene expression in the retina–the sensory tissue at the back of the eye. That study is the subject of a paper, “Spaceflight Effects and Molecular Responses in the Mouse Eye: Preliminary Observations after Shuttle Mission STS-133,” recently published in Gravitational and Space Research.

Results from a study of mice from the second flight were detailed by Xiao W. Mao, MD, a researcher in the Division of Radiation Research at Loma Linda University and Medical Center in California, and her colleagues in “Spaceflight Environment Induces Mitochondrial Oxidative Damage in Ocular Tissue,” published in Radiation Research.

This is retina tissue from a normal mouse (A) and after spaceflight (B) indicate oxidative damage, identified with green fluorescence. Nuclei are stained blue. Credit: Radiation Research

Both studies implicated oxidative stress in eye damage. Spaceflight exposes astronauts – and mice – to radiation, hypothermia, hypoxia and variations in gravity, all of which may play roles in tissue injury, and, in particular, oxidative stress. Oxidative stress reflects an imbalance between the reactive oxygen that is generated by normal cell metabolism and the cell’s ability to handle toxic byproducts from that metabolism.

The imbalance created by oxidative stress produces peroxides and free radicals, which contribute to a number of degenerative conditions, including aging. They also are known to cause damage to DNA, proteins, cell membranes and organelles inside cells. These organelles include mitochondria that convert oxygen and nutrients into energy. Mitochondria are particularly sensitive to oxidative stress and, therefore, to the effects of microgravity and radiation in space. Mitochondria are thought to play an important role in damage to the retina and have been linked to age- and disease-related eye problems.

Mao’s study examined mitochondria-associated gene expression in the mouse eye tissue and found significant changes in several genes involved in oxidative stress response. “We measured 84 genes and found nine that are really critical for developing these changes and associated with damage,” she said. “These changes were after short-term flight and might be reversible or might deteriorate over time. But the data so far do indicate a risk to astronauts from oxidative changes.”

In the STS-133 samples, Zanello found increased expression of genes involved in response to oxidative stress in retina tissue. “We saw this effect immediately after landing, which means it was a defensive increase in response to oxidative stress,” she said. Also notable was that a week after spaceflight, the response had decreased, indicating that the damage may be reversible. “That opens the door to the possibility of countermeasures, such as nutritional anti-oxidants,” Zanello said. 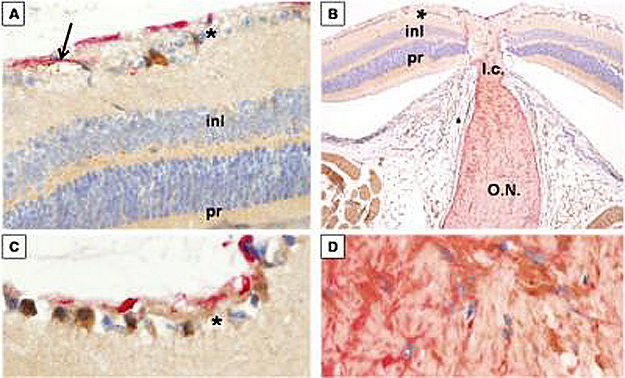 This is a magnification of mouse retina flown in space, (A) low and (C) high magnification, with glial fibrillary acid protein in red. (B) and (D) show low and high magnification, respectively, of optic nerve with accumulation of beta-amyloid (brown) in the retinal ganglion cells. Credit: Gravitational and Space Research

The Zanello study also reports the presence of two indicators of optic nerve damage, glial fibrilar acidic protein (GFAP) and beta-amyloid. GFAP is known to be elevated by stress and inflammation in the central nervous system and present following retina injury. Studies have found beta-amyloid in tissue following traumatic brain injury and as evidence of optic nerve damage in shaken-baby syndrome.

Both researchers say more work needs to be done to confirm these results and to develop appropriate countermeasures. This follow-up investigation also could use the tissue-sharing program, but researchers say they need a larger number of samples from model organisms that had longer exposure to space.

These investigations move scientists closer to development of countermeasures, such as drugs or dietary supplements, to protect the eyes and vision of astronauts. People on Earth with eye problems related to aging, such as macular degeneration, and diseases, such as diabetic glaucoma, also would benefit. That will mean more people can enjoy beautiful sights, whether in space or on the ground.