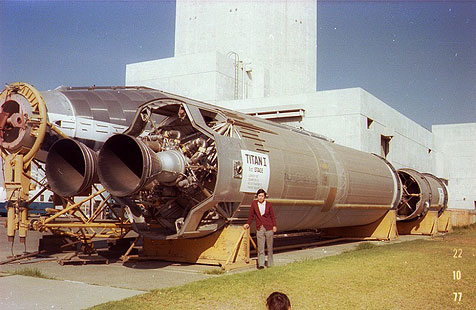 Joel Powell, author of “Go For Launch: An Illustrated History of Cape Canaveral,” sent this note regarding an image taken on 22 October 1977: “Keith: Art LeBrun and myself have followed your efforts to restore Titan 4492 at Ames with fascination (I understand that you were very impressed with Art’s photos of 4492 and the Atlas from 40 years ago). Let me add an air of mystery to the story. I found the attached ‘tourist’ photo off 4492 and an Atlas at Ames through a Yahoo image search (Image source).”
“If you look closely at the Atlas, it has the tapered front end of an Atlas ICBM, not the full cylindrical shape of the test Atlas [which was very likely number 116D, a well-utilized test article] shown in Art’s photo and the picture on CollectSpace. Is this the same Atlas used for the aerodynamic damping tests in 1970, or was it a different Atlas brought to Ames at a later date for temporary display? If the Atlas tests at Ames in 1970 did indeed utilize 116D, the front end was not tapered like the ICBM version, it was the ‘flat’ SLV-3 version used for Atlas-Centaur (there are photos of 116D at Plum Brook, Ohio and at the Cape for fit-and-function tests at pad 36B in 1963). What do you think?”