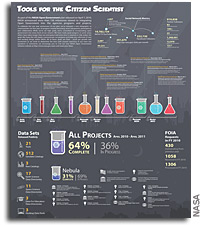 “As part of the NASA Open Government plan released on April 7,201 0, NASA announced more than 150 milestones related to integrating Open Government into the agencies programs and projects. To celebrate the one year anniversary of our plan, we’ve released a new infographic to communicate our first year of progress toward becoming more transparent, participatory, and collaborative. While we’ve set high goals, we’re committed to incorporating open government into every facet of our mission. We have made great progress in some areas; others have taken longer than we anticipated and extra time is required to fully realize the goals. We hope this will clearly communicate our progress and keep you informed of new and exciting things within NASA. All of these goals are fluid – you’ll see growth and movement as we work to determine the best path toward openness. If you have any questions or comments, we encourage you to visit our new NASA Open Government Initiative website at http://www.nasa.gov/open and share your ideas.”