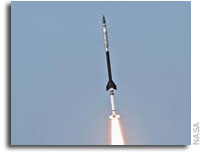 NASA will launch a Virginia Tech University experiment to measure nitric oxide in the upper atmosphere this winter from the Poker Flat Research Range in Alaska. The Polar Night Nitric Oxide experiment will be launched on a suborbital flight aboard a NASA Black Brant IX sounding rocket. The launch is scheduled for no earlier than January 30. Scott Bailey, assistant professor in the Bradley Department of Electrical and Computer Engineering at Virginia Tech, is leading the experiment called “Polar NOx.” The experiment is designed to measure the intensity of nitric oxide in the mesosphere and lower thermosphere in the polar region.
Nitric oxide is believed to be a catalyst destroyer of ozone. Successful data acquisition will help scientists understand the abundance of nitric oxide in the lower thermosphere and its relationship to solar energy deposition. The University of Colorado, Boulder, is working with Va. Tech on the experiment. The Black Brant IX vehicle is a two-stage, solid propellant, four-fin stabilized sounding rocket. It is predicted to fly to an altitude of approximately 173 miles.

Information on the NASA Sounding Rocket Program is available on the Internet at: http://sites.wff.nasa.gov/code810

Information on the “Polar NOx” experiment is available on the Internet at: http://www.space.vt.edu/research/gallery.html