Download App
A few hours before a gigantic bubble of electrified gas and charged particles erupted from the Sun, NASA officially released the new Space Weather App making images and other data almost immediately available to users. “The timing was perfect,” said Antti Pulkkinen, a scientist at the Community Coordinated Modeling Center (CCMC) at NASA’s Goddard Space Flight Center in Greenbelt, Md. The multi-agency organization researches and develops models to help scientists better forecast space weather.
Luckily for Earthlings, the fast-moving coronal mass ejection (CME) that raced through space at 2,200 kilometers (1,242 miles) per second, did not strike Earth directly. It made a glancing blow, sparing satellites, power grids, and electrical-transmission lines from damage and disruption that can happen during particularly severe space-weather events.

However, the eruption did trigger a run at the iTunes store. Within just a couple days, 1,500 users had already downloaded the application, making it one of the store’s 20 most popular in the weather category, said Marlo Maddox, CCMC’s Deputy Director for Operations and one of the Goddard computer scientists who helped develop the program.

Developed jointly by Goddard’s engineering and science directorates, and based on support from NASA’s Heliophysics Division as well as the National Science Foundation, the application gives users real-time access to solar-event images, data, model simulations, and forecasts as they evolve and affect the near-Earth space environment. Currently, 200 products observed primarily by NASA missions or modeled at the CCMC are available. The easy-to-use application also allows users to customize the program so that it displays only information of interest to them. 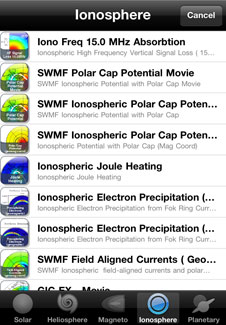 “We wanted to make this information more mobile,” explained Michael Hesse, Chief of the Space Weather Laboratory and CCMC director. That way, scientists can access the information anywhere, anytime. “With tools like these, we also wanted to increase the public’s awareness of space weather to the point where coronal mass ejections and solar flares are as familiar to most as hurricanes and tornadoes,” Hesse added. “Users can be assured that they are accessing the same world-class, state-of-the-art information used by the professional space science community,” Maddox added.

Work began on the iPhone application 18 months ago and was led by Goddard computer scientist Richard Mullinix, who has experience developing iPhone applications. However, the team doesn’t intend to stop there. The group is now developing versions for Android mobile phones, the iPad, and other electronic tablets, said Goddard computer scientist David Berrios. Those releases are expected by the end of the summer.

The timing is fortuitous, team members agreed. The Sun undergoes an 11-year cycle that goes from a solar minimum, a period where the Sun produces few if any sunspots, which are areas of magnetic concentration that disrupt energy production on the Sun’s surface and appear as dark spots, to solar maximum, a period of intense activity distinguished by giant blasts of energy and material into space. Based on recent solar events, it appears that the Sun is emerging from a long solar minimum and headed into a solar maximum, distinguished by the growing number of CMEs and energetic X-ray outbursts, Pulkkinen said.

To stay abreast of these events, the public may download the free application from iTunes or the App store on iOS devices. To improve the application, the team invites feedback from users. To weigh in, users may leave comments at [email protected]

For those who do not own an iPhone, space weather information can be obtained via CCMC’s integrated Space Weather Analysis system at http://iswa.ccmc.gsfc.nasa.gov.