Disaster relief workers on the ground in Mexico City were responding to this week’s 7.1-magnitude earthquake by using a suitcase-sized radar instrument capable of detecting human heartbeats under rubble.
This technology was developed by NASA’s Jet Propulsion Laboratory, Pasadena, California, and the Department of Homeland Security’s Science and Technology Directorate in Washington. FINDER, which stands for Finding Individuals for Disaster and Emergency Response, was developed as a collaboration between the two agencies.

Since 2015, two private companies have acquired licenses for the technology. They have since taken it to disaster zones, training relief workers to use it and manufacturing new units.

“Our hearts go out to the people of Mexico,” said Neil Chamberlain, task manager for FINDER at JPL. “We’re glad to know our technology is being used to make a difference there.”

As of Thursday, Sept. 21, one of the licensees, a company called SpecOps Group Inc., was in Mexico City and actively searching for survivors. President and CEO Adrian Garulay said members of the company were escorted to the disaster site and connected with rescue workers. 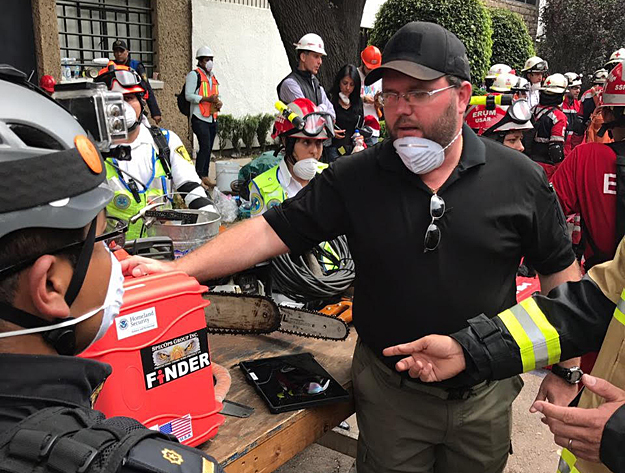 Troy Hubschmitt, product manager at SpecOps Group, Inc., with a FINDER radar unit in Mexico City. SpecOps is one of two private companies that have licensed the technology for use at disaster sites. It was developed in a collaboration between NASA’s Jet Propulsion Laboratory and the Department of Homeland Security’s Science and Technology Directorate. Image Credit: SpecOps Group, Inc

A second company, R4 Incorporated, sold FINDER units to the fire department of Quito, Ecuador, after responding to an earthquake there last year. David Lewis, president and CEO of R4, said the Quito fire department had dispatched its units to Mexico City to aid in the search for victims.

Lewis was in Puerto Rico earlier this week using FINDER to search for survivors of Hurricane Maria. Hurricanes are a relatively new use case for the technology. While radar can’t search through water, it’s useful for detecting heartbeats through rooftops. People trapped in flooded buildings often run to the upper floors. He said they didn’t find anyone in the day or so that they used FINDER.

“This is one of those instances when we have developed a technology we hope will never be needed,” said DHS Under Secretary (acting) for Science and Technology William N. Bryan. “But it’s good to know it’s out there when we unfortunately have to use it.”

FINDER sends a low-powered microwave signal — about one-thousandth of a cell phone’s output — through rubble. It looks for changes in the reflections of those signals coming back from tiny motions caused by victims’ breathing and heartbeats. In tests, FINDER has detected heartbeats through 30 feet of rubble or 20 feet of solid concrete. The technology evolved from JPL’s efforts to develop low-cost, small spacecraft radios, using signal processing developed to measure small changes in spacecraft motion.

Both companies work with the direction of local governments when they travel to disaster sites. FINDER is used alongside a variety of other techniques, including trained dogs, acoustic sensing devices and thermal imagers. All these techniques are usually deployed together.

When FINDER was deployed to Nepal after a major earthquake in 2015, it helped find four men trapped under a collapsed textile factory. Lewis said it’s hard to confirm exactly how many lives the technology has saved in total, since he doesn’t have data from relief teams that have purchased their own units, and it’s often used in conjunction with other methods.

“On 24 April 2015 a 7.9 magnitude earthquake struck Nepal – a nation woefully unprepared to respond to such an event. Nearly 300 aftershocks of magnitude 4.0 or greater have rattled the country for the past month. One especially large aftershock of magnitude 7.4 on 12 May caused the already-shattered infrastructure to collapse further. Nepal needed help – help that did not rely upon a non-functional infrastructure. Much of the help was traditional. But some of that help arrived in the form of assets in space and space-derived assets on the ground. One piece of NASA-developed hardware utilized in Nepal was able to detect human heartbeat amidst huge piles of rubble. And it saved lives. Other machines orbited overhead in space analyzing the earthquake itself and how Nepal changed as a result. Both technologies shared similar technology.”