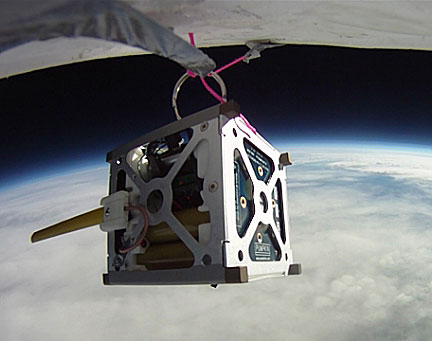 “Are smartphones so smart they can operate a spacecraft? NASA wants to find out. The space agency has for months been conducting tests to see if smartphones can survive by literally sending them to the edge of space. NASA last week conducted the most recent of these tests, sending an Android phone up nearly 100,000 feet on a balloon. Last August, it was a Google Nexus One phone on a rocket. “The cell phone industry has invested billions of dollars in these phones. They’ve packed a lot of capability into a really small volume,” said Chris Boshuizen, a senior systems engineer at Logyx, a California-based technology firm. The power of today’s smartphones rival those of many desktops and even exceed that of many satellites, said Boshuizen, which allows them to cheaply transmit photos and data. Phones running the Google Android OS have gigahertz processors, half a gigabyte of RAM, and accelerometers and magnetometers to measure gravity and direction.” More at Fox News.