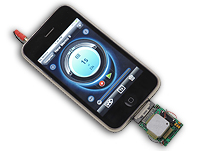 Jing Li, a physical scientist at NASA’s Ames Research Center, Moffett Field, Calif., along with other researchers working under the Cell-All program in the Department of Homeland Security’s Science and Technology Directorate, developed a proof of concept of new technology that would bring compact, low-cost, low-power, high-speed nanosensor-based chemical sensing capabilities to cell phones.

The device Li developed is about the size of a postage stamp and is designed to be plugged in to an iPhone to collect, process and transmit sensor data. The new device is able to detect and identify low concentrations of airborne ammonia, chlorine gas and methane. The device senses chemicals in the air using a “sample jet” and a multiple-channel silicon-based sensing chip, which consists of 16 nanosensors, and sends detection data to another phone or a computer via telephone communication network or Wi-Fi.