Nanosatellites now have their own mass transit to catch rides to space and perform experiments in microgravity. A new NASA-designed and developed satellite deployer, dubbed the Nano Launch Adapter System (NLAS), is scheduled to demonstrate the capability to launch a flock of satellites into space later this year.
Image: The Nanosatellite Launch Adapter System (NLAS) was developed to increase access to space while simplifying the integration process of miniature satellites, called nanosats or cubesats, onto launch vehicles. It consists of an adapter, four dispensers and a sequencer. The adapter is mounted to the lower surface of the launch vehicle and the upper deck of the primary mission spacecraft. Image credit: NASA Ames Larger image

Engineers expect that several NLAS could be stacked in a launch vehicle, allowing a single launch to bring dozens of small satellites to orbit. Once the primary spacecraft is safely delivered to orbit, NLAS deploys its payloads successively to their destinations, sometimes in a constellation. 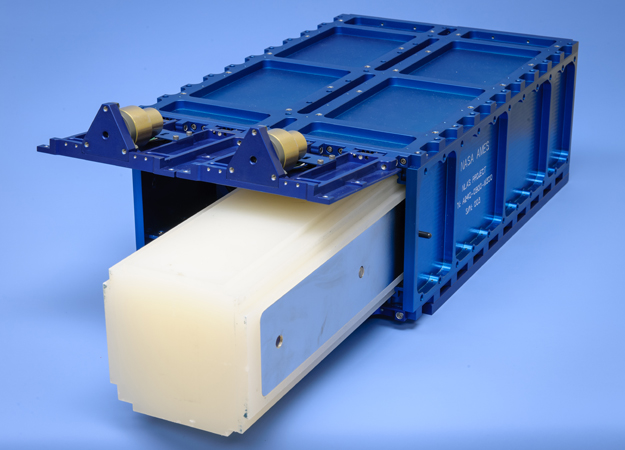 This NLAS flight demonstration is expected to show the potential value of multiple, small satellites as tools for a wide array of scientific, commercial, and academic space research. Other goals of the project include reducing the cost and time required to integrate nanosatellites to rockets.

Each time a rocket launches, it must be painstakingly balanced using ballast – which can be sand, water or metal used as a balancing mechanism – to ensure its trajectory is accurate. Nanosatellites and their deployment systems also can act as ballasts during launches.

“Small spacecraft have the advantage of being able to share launches with other spacecraft, reducing the launch cost to the spacecraft developer team. This allows us to launch a number of these smallsats in support of NASA’s space technology goals,” said Bruce Yost, the program manager for the Small Spacecraft Technology Program at NASA Ames.”

NLAS was designed and constructed by a team of experts from the Mission Design Division at Ames, commercial entities, and other government agencies. NASA Ames employees built the NLAS deployer using off-the-shelf components and specially crafted parts designed to standard dimensions for 1-, 3- and 6-unit nanosatellites launched from a variety of rockets, including Falcon 1 and Minotaur 1. NLAS is jointly funded by the Small Spacecraft Technology Program of the Space Technology Mission Directorate at NASA Headquarters in Washington and NASA Ames.

For more information about the Mission Design Division at NASA Ames, visit: http://www.nasa.gov/centers/ames/engineering/divisions/missiondesign