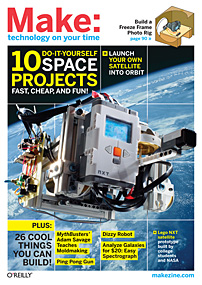 MAKE blasts into orbit and beyond with our DIY SPACE issue. Put your own satellite in orbit, launch a stratosphere balloon probe, and analyze galaxies for $20 with an easy spectrograph! We talk to the rocket mavericks reinventing the space industry, and renegade NASA hackers making smartphone robots and Lego satellites. Of course, as usual, we’ve got a full payload of other cool DIY projects, from a helium-balloon camera that’s better than Google Earth, to an electromagnetic levitator that shoots aluminum rings, to a simple stroboscope that takes the most amazing freeze-frame photos.

– Making Your Own Satellites by Chris Boshuizen – Build and launch your own sat for as little at $8,000
– Rocket Men by Charles Platt – Mavericks of the Private Space Industry
– Listening to Satellites by Diana Eng – Tune in to space with a homemade yagi antenna
– Weather Balloon Space Probes by John Baichtal – Sense, signal and snap photos in the stratosphere.
– High Resolution Spectrograph b Simon Quellen Field – Lab-worthy spectrum analysis for cheap
– Five Cool Participatory Space Projects by Ariel Waldman
– Cash Prizes for Space Scientists by John Baichtal – A summary of student and professional challenges
– Space Science Gadgets You Can Make for NASA – by Matthew F. Reyes
– Open Sourcing Space by Dale Dougherty